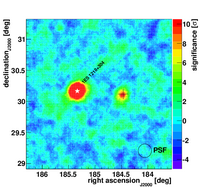 In 2011, the source entered a prolonged high state, during which no significant variability was detected in the VHE regime. The integral flux above 200 GeV corresponds to 3.4% of the Crab Nebula flux and the energy spectrum can be well described by a power law.

Multiwavelength (MWL) observations were obtained quasi-simultaneously with the VERITAS observations in 2011, covering optical (Super-LOTIS, MDM, Swift-UVOT), X-ray (Swift-XRT) and gamma-ray (Fermi-LAT) frequencies. These observations were used to construct the spectral energy distribution of B2 1215+30 which can be successfully modeled with a one-zone synchrotron self-Compton model. Through a comparative study with other blazars detected by VERITAS, we could show that most of the parameter values used to model the broadband emission of B2 1215+30 are in the range of other VERITAS-detected blazars, making this blazar a typical very-high-energy gamma-ray emitter.

Figure 1:  VERITAS significance sky map of 2011. The black cross shows the position of B2 1215+30 and the white star indicates the position of 1ES 1218+304. Both sources are point-like, but appear to have a different size due to the saturation of the color scale. 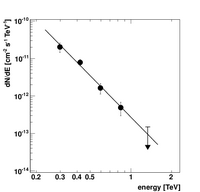 Figure 2: Differential photon spectrum of B2 1215+30 obtained with VERITAS in 2011. The spectral points are fitted with a power-law. The error bars denote 1σ uncertainties, and an 95% upper limit is drawn for a spectral point with less then 2σ significance. 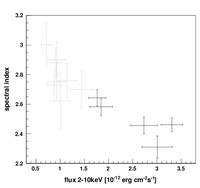 Figure 5: Spectral energy distribution of B2 1215+30 during 2011 together with the SSC model for a redshift of z = 0.130. The data points are the following (from low to high frequencies): (open diamonds) archival data, (•) optical data from MDM, (downwards-pointing triangles) high X-ray state observed by Swift -XRT & UVOT, (upwards-pointing triangles) low X-ray state observed by Swift -XRT & UVOT, (•) Fermi-LAT, (solid squares ) VERITAS, and (o) MAGIC. The blue lines represent the model for the high X-ray state data set and the orange lines the model for the low X-ray state, respectively. Solid lines take the archival data in the micrometer regime into account; dashed lines are the model using contemporaneous data only (see text for details).