The most recent image of the sky over VERITAS is shown here. North is the top of the image, and West is on the right. Go to the bottom of the page for the previous night's timelapse movie and star trail images. 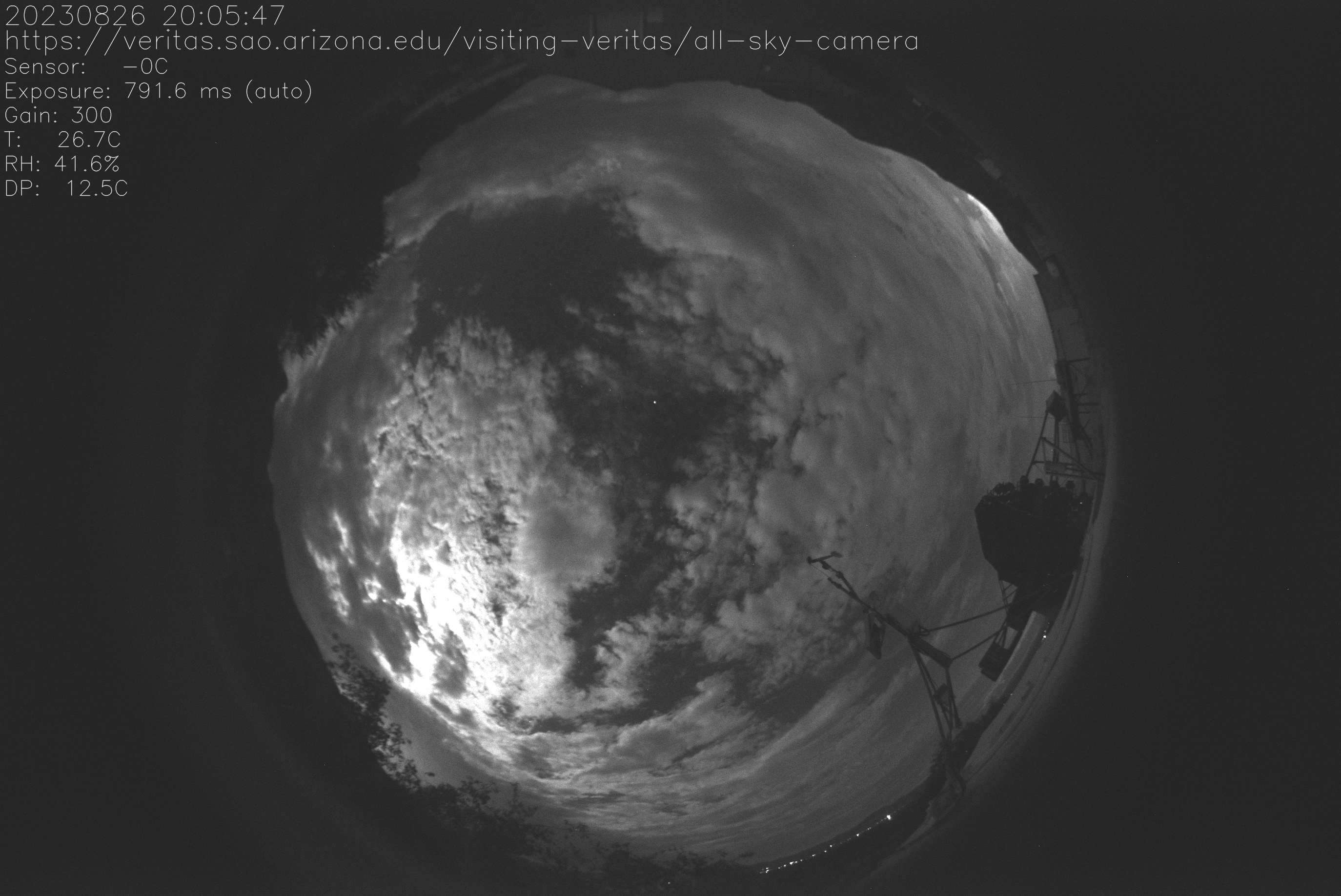 Last night's timelapse movie is shown below. On a typical clear night, in addition to the VERITAS telescopes tracking objects in the sky, you will see plenty of planes flying overhead, as well as occasional meteors streaking through the sky, even satellites if you look carefully. Planes appear as long, thick lines of light that take a few seconds to move across the image. A meteor will appear as a thin line that appears and disappears in a flash. Satellites appear as either thin, faint continuous lines of light or faint "flashing" light that moves slowly across the sky.  They are most often seen after dusk and before dawn since they need sunlight to reflect off parts of their structure to be seen by the camera. Some satellites spin rapidly while in orbit, hence it will look like it is "flashing", this is just the sunlight catching reflective parts of the satellite as it rotates. Other satellites like the International Space Station (ISS) spin very slowly, and appear as a solid streak of light as the sun reflects mainly off of their solar collectors. You can watch the ISS transit over VERITAS  in these timelapse images by using satellite prediction web pages like heavens-above (ISS transits). Look for transits where the brightness of the satellite is negative for the best chance to see it. Set location to the Whipple Observatory's latitude and longitude: 31.675 deg N, 110.951 deg W, 1225 m above sea level.  Another interesting phenomenon to observe is the difference in paths taken by the Sun and Moon as they cross the Southern sky. The Moon's plane of orbit is tilted about 5.1 degrees from the ecliptic. In the timelapse movie you can see how the Moon's arc across the sky is slightly different from the Sun's. If it were not for this tilt, we would experience total solar and total lunar eclipses every month.

Star trails shows the path of stars throughout the night. The pole star, Polaris, which is part of the constellation Ursa Minor (The Little Bear or The Little Dipper) never sets over VERITAS and because the Earth's rotational axis points approximately towards it, all other stars appear to rotate around Polaris. The trails of planes, meteors, and satellites transiting are also easy to spot here. Meteors usually appear as short thin streaks but sometimes they have a fat "tail" when they burn the brightest, then a short thin streak emanating from the tail as they disinitegrate. Click here for an example of what can be seen in one night. Star trail images are made when the sky is very dark. On nights when the moon is up for a significant porton of the time, the image does not show long trails, if any at all. Also, on cloudy nights light pollution scattered from Tucson/Green Valley and Nogales makes the sky too bright to generate star trail images. 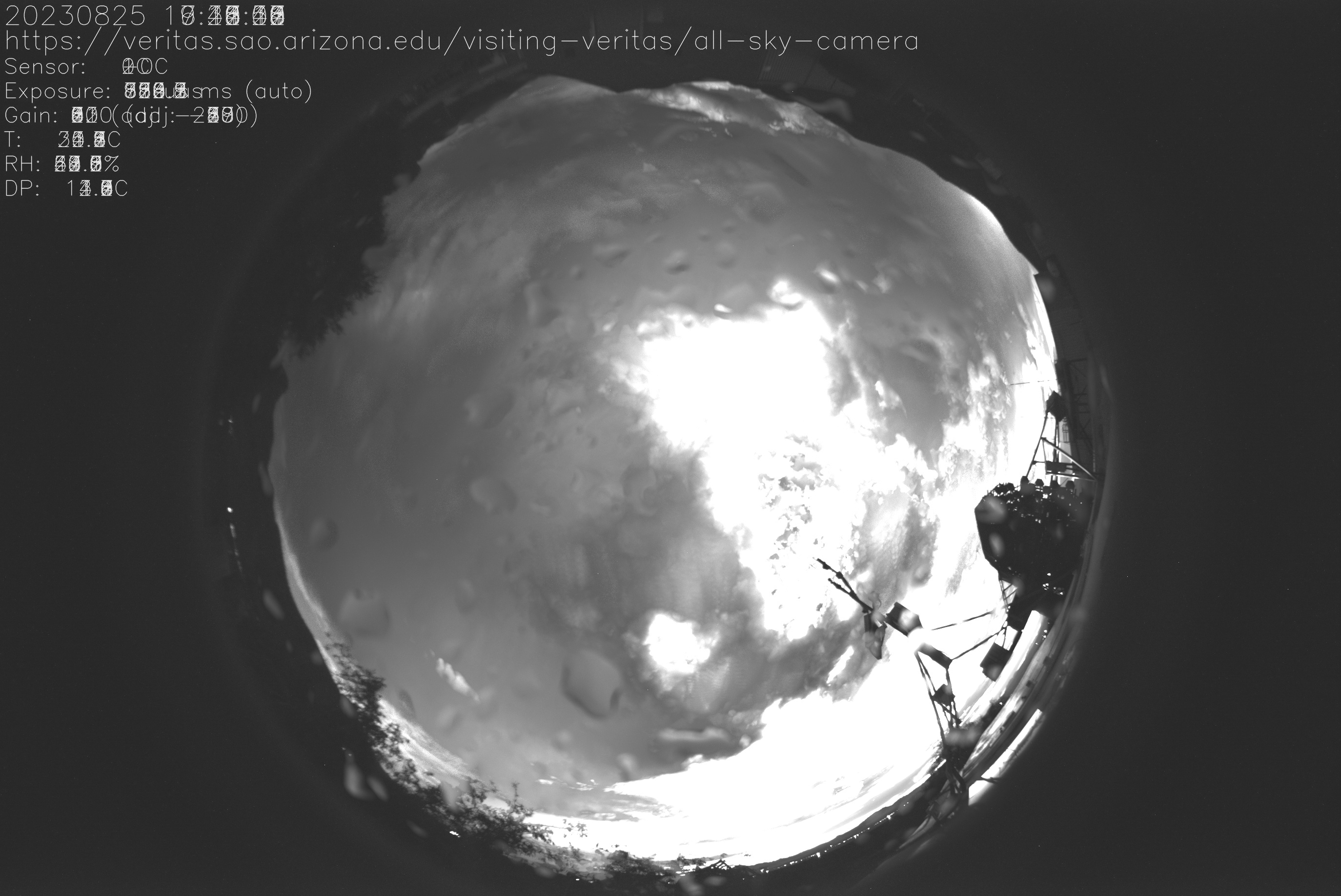 The keogram, below, is useful to see how clouds travelled over VERITAS during the night. It is created by taking a single slice (taken along the meridian line) of each image taken over the previous 24 hours, then stacking those slices in time progression from left to right. In the image below the top of the image is the Northern horizon and the bottom is the Southern horizon. The left represents images taken in the morning and as it moves to the right are images taken later in the day and night. The numbers at the bottom mark the local hour when the image slice was taken. The keogram was designed to observe auroral activity, something likely never seen in Southern Arizona, but can also be used to assess cloud activity of the overhead sky on an hourly basis. 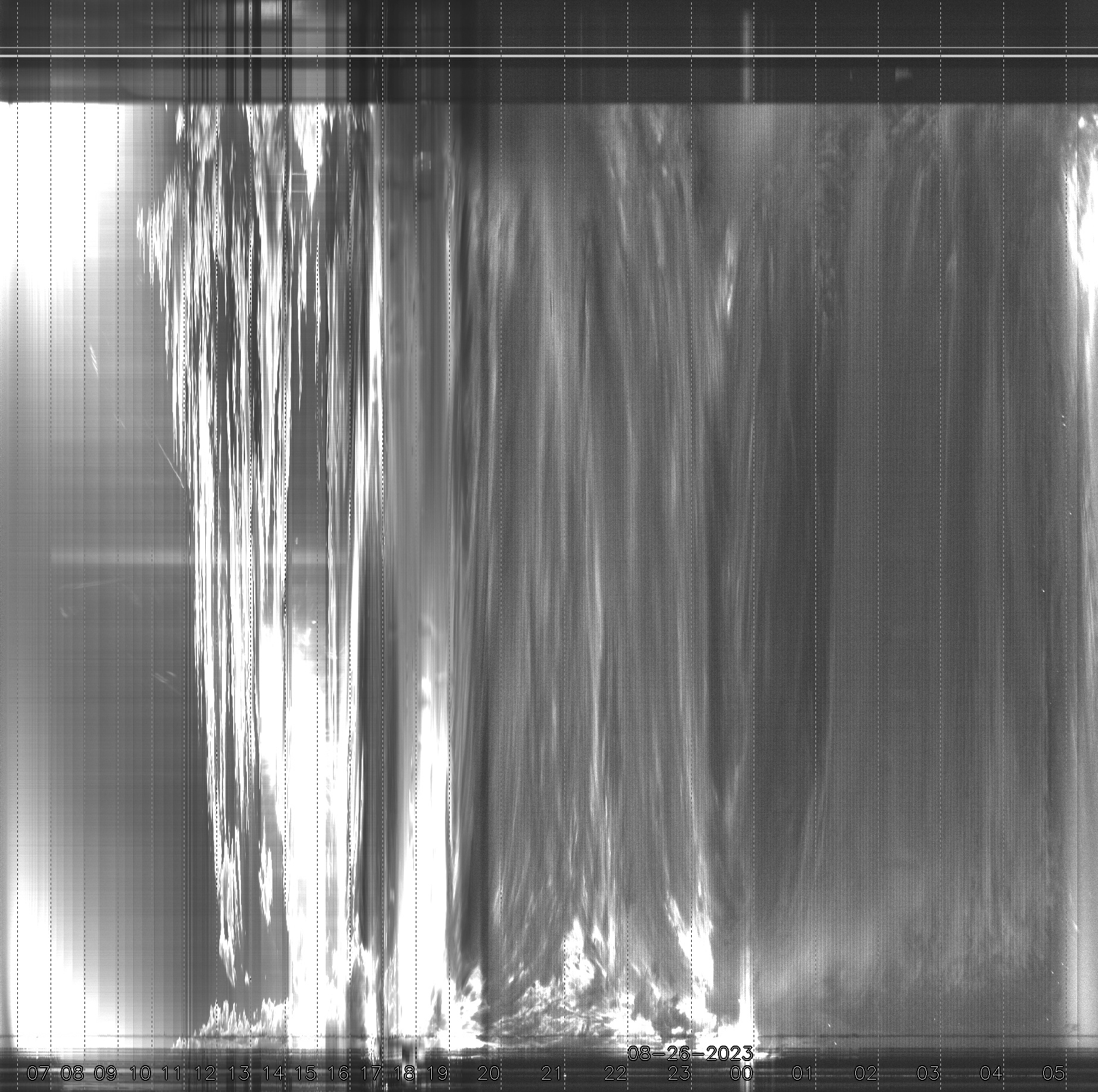