Multiwavelength Observations of The TeV Binary LS I +61 303 with VERITAS, Fermi-LAT and Swift-XRT During a TeV Outburst

The combined VERITAS and Fermi-LAT spectral energy distribution for LS 1 +61 303. See Figure 5 below for a higher-resolution image.

In this paper, we present the results of a multiwavelength observational campaign taken on the TeV binary system LS I +61 303 with the VERITAS telescope array (>200 GeV), Fermi-LAT (0.3-300 GeV), and Swift-XRT (2-10 keV). The data were taken from December 2011 through January 2012 and show a strong detection in all three wavebands. During this period VERITAS obtained 24.9 hours of quality selected livetime data in which LS I +61 303 was detected at a statistical significance of 11.9 σ. These TeV observations show evidence for nightly variability in the TeV regime at a post-trial significance of 3.6σ. The combination of the simultaneously obtained TeV and X-ray fluxes do not demonstrate any evidence for a correlation between emission in the two bands. For the first time since the launch of the Fermi satellite in 2008, this TeV detection allows the construction of a detailed MeV-TeV spectral energy distribution from LS I +61 303. This spectrum shows a distinct cutoff in emission near 4 GeV, with emission seen by the VERITAS observations following a simple power-law above 200 GeV.

In addition to the lack of correlation seen in emission in the various bands observed, the rather unusual feature in the spectrum of LS I +61 303 (i.e. a distinct spectral break in the several GeV regime) indicates that there are two distinct populations of accelerated particles producing the GeV and TeV emission. Moreover, the similarity between this spectrum and the high energy spectrum of known binary pulsars (such as PSR B1259-63) would appear to suggest that LS I +61 303 is powered by the energetic shock front of pulsars, instead of the alternative model where the system includes a black hole (i.e. accretion powered).

Figure 1:  The VERITAS (>350 GeV daily integrations, top), Fermi-LAT (0.3-300 GeV, middle), and Swift-XRT (0.3-10 keV, bottom) light curves for LS I +61◦ 303 during December 2011 - February 2012. The data is also shown as a function of orbital phase ( Φ). VERITAS 99% flux upper limits are shown for points with < 3 significance and are represented by arrows. Fermi-LAT upper limits (90% confidence level) are also shown by arrows. The grey shaded regions represent the observations obtained simultaneously which are used for the X-ray/TeV correlation studies in this work. 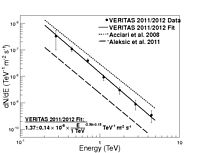 Figure 3: The comparison of the strictly simultaneous Swift-XRT and VERITAS data points. The data shows a correlation coefficient of 0.36±0.32, consistent with two uncorrelated data sets.

Figure 4: The comparison of nightly VERITAS and Fermi-LAT flux points. Analysis of the data results in a correlation coefficient of 0.1±0.3, consistent with two independent data sets.