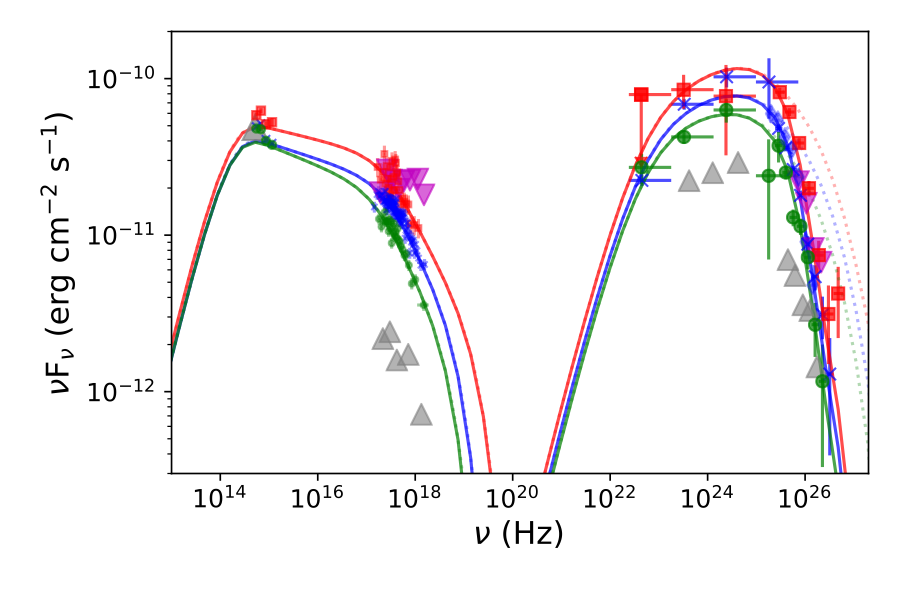 Broadband SED during the three Bayesian blocks obtained from the VERITAS light curve in the 2013 to 2014 season. See Figure 9 below for more details.

To date, there are 55 known TeV blazars that have high-frequency (>10^15 Hz) synchrotron peaks in the spectral energy distribution (called HBLs); whereas only 12 have intermediate- or low-frequency synchrotron peaks (called IBLs and LBLs). The differences and similarities between these two groups of blazars can help us understand the nature of gamma-ray blazars.

VER J0521+211 is among the brightest and most variable out of the 12 TeV IBL/LBLs. It went into a flaring state in 2009 when it showed HBL-like features (See The VERITAS Collaboration 2013 [ui.adsabs.harvard.edu]). We examined the multiwavelength variability in flux and spectrum of VER J0521+211 during a sustained flaring episode from late 2012 to early 2014. Unlike during the flare observed in 2009, the X-ray spectrum remained rather soft in 2013 and 2014, indicating dramatic X-ray spectral variability over a few years. Evidence for a more-than-linear correlation between the TeV gamma-ray flux and the X-ray/UV flux was found. A leptonic (one-zone SSC) model was found to adequately describe the broadband spectrum, which was divided into three periods using a Bayesian block method. The synchrotron peak frequency remained below 10^15 Hz for the entire period based on the model. Our results indicate the source remained "IBL-like" in this flaring period, as opposed to the flare in 2009. We also set a more constraining upper limit (compared to that obtained from data in 2009) on the redshift of the source, z≤0.31. 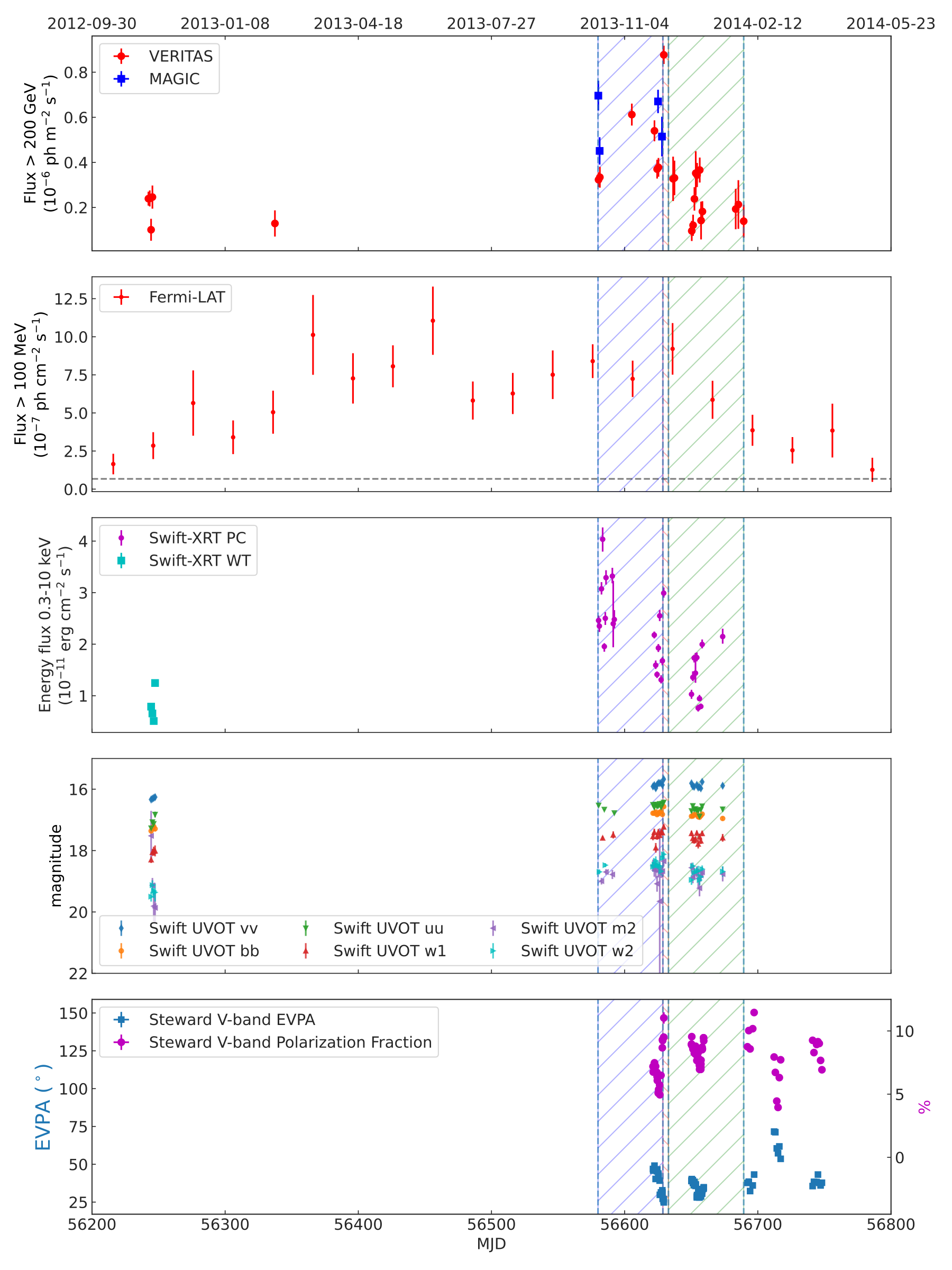 Figure 1:  MWL light curves of VER J0521+211 of the entire period of interest in this work, from late 2012 to early 2014. The vertical dashed lines and the colored hatch fills illustrate the three Bayesian blocks between late 2013 and early 2014, based on which we selected the three periods for SED modeling. The binning of the light curves is nightly for VERITAS and MAGIC, monthly for Fermi-LAT, and by observations for Swift
and Steward Observatory. Only 1-σ statistical uncertainties are shown. 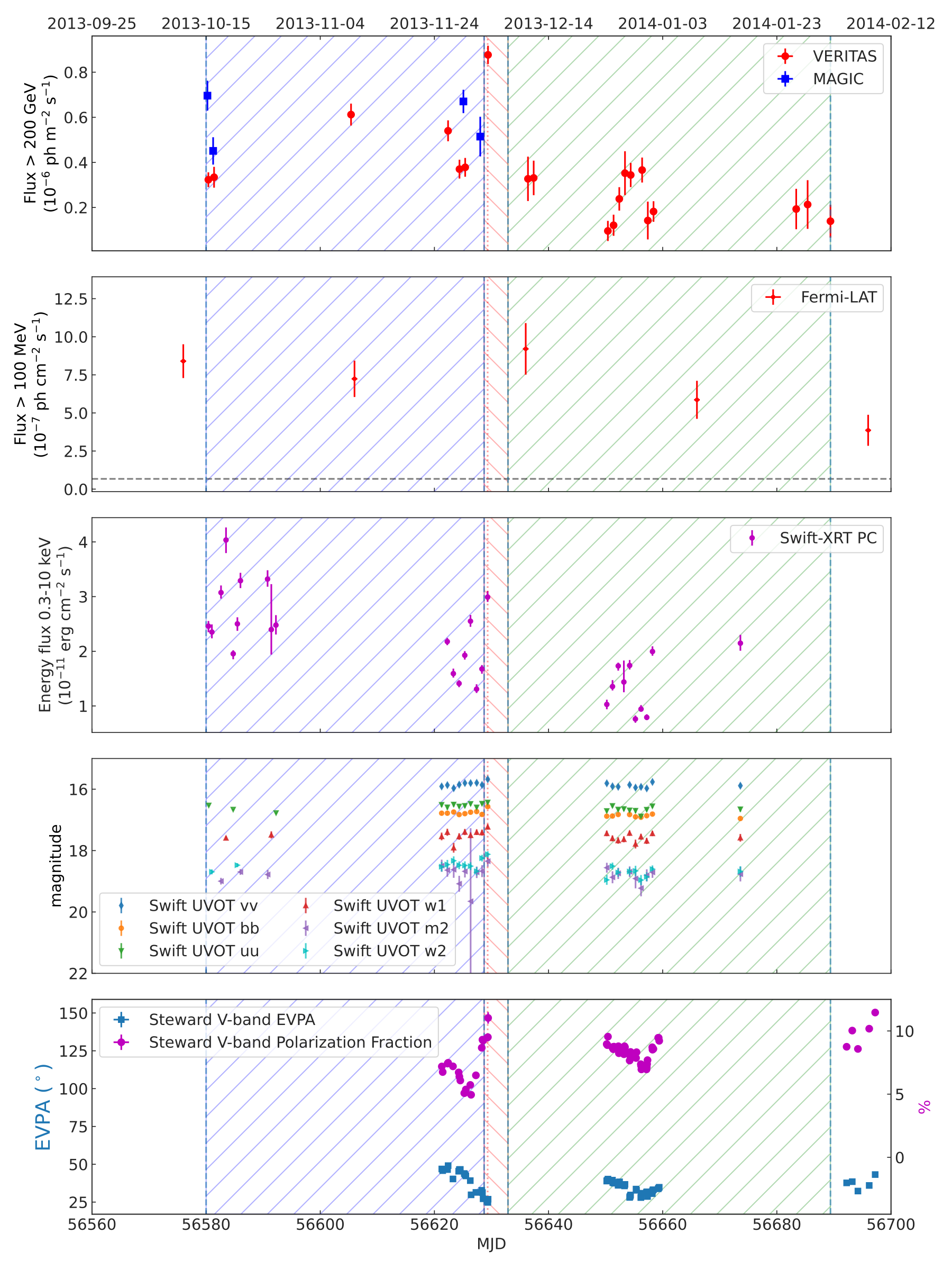 Figure 2: MWL light curves of VER J0521+211 focusing on the data between late 2013 and early 2014. The vertical dashed lines and the hatch fills illustrate the three Bayesian blocks (hatched filled in blue, red, and green, sequentially). The date ranges of the Bayesian blocks are listed in Table 1. The vertical red dotted line illustrates the one night with the highest TeV gamma-ray flux, during which activity at other
wavelengths can also be seen. Only 1-σ statistical uncertainties are shown. 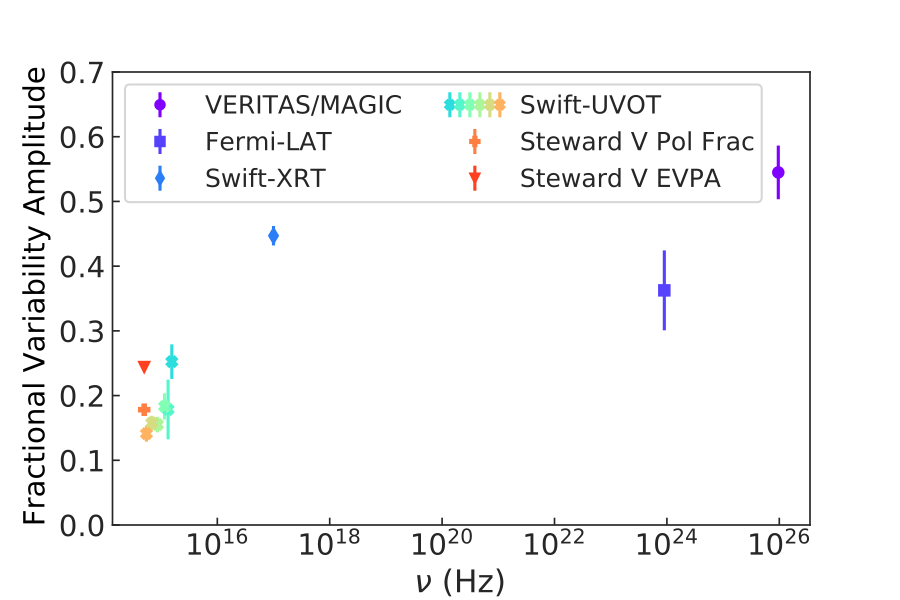 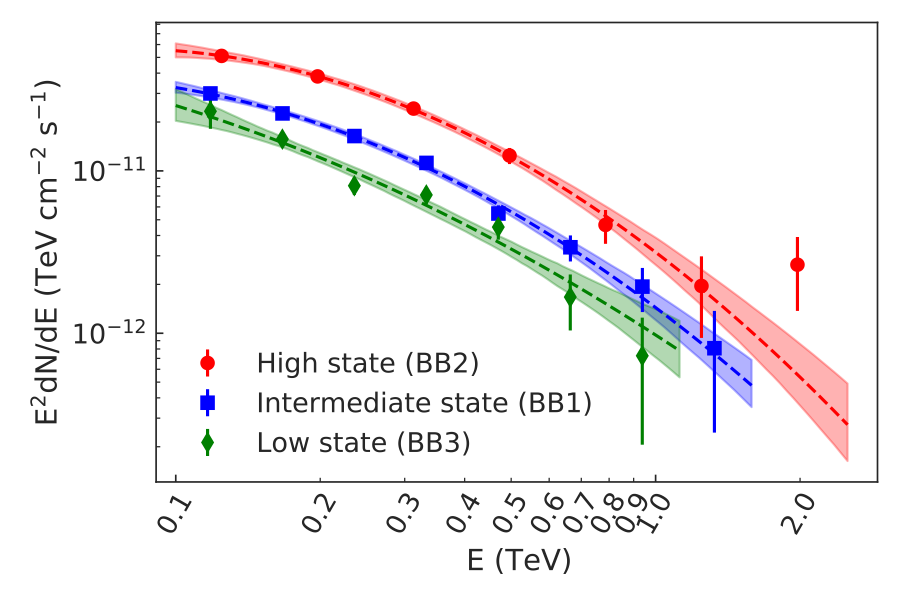 Figure 4: The VERITAS gamma-ray spectra of VER J0521+211 during three different flux states. The dashed lines show the best-fit log-parabola models for the spectra. The 1-σ uncertainties from the model parameters are shown in shaded colors. These flux states were chosen based on a Bayesian block analysis of the VERITAS TeV gamma-ray light curve. 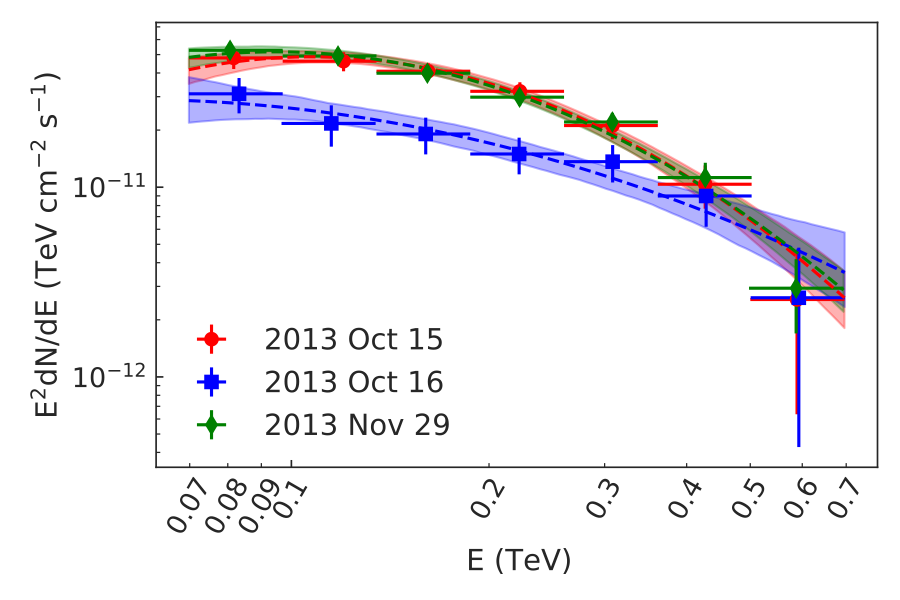 Figure 5: The MAGIC gamma-ray spectra of VER J0521+211 from observations on three nights in 2013. The dashed lines show the best-fit logparabola
models. 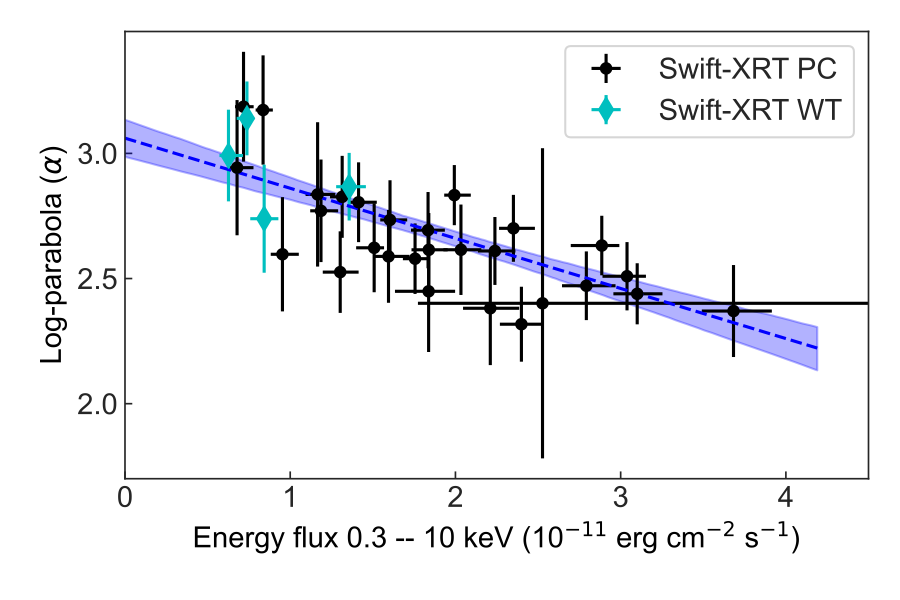 Figure 6: Scatter plot to investigate the correlation between the best-fit X-ray photon index at 2 keV and the X-ray energy flux. The blue dashed line shows the best-fit linear model. 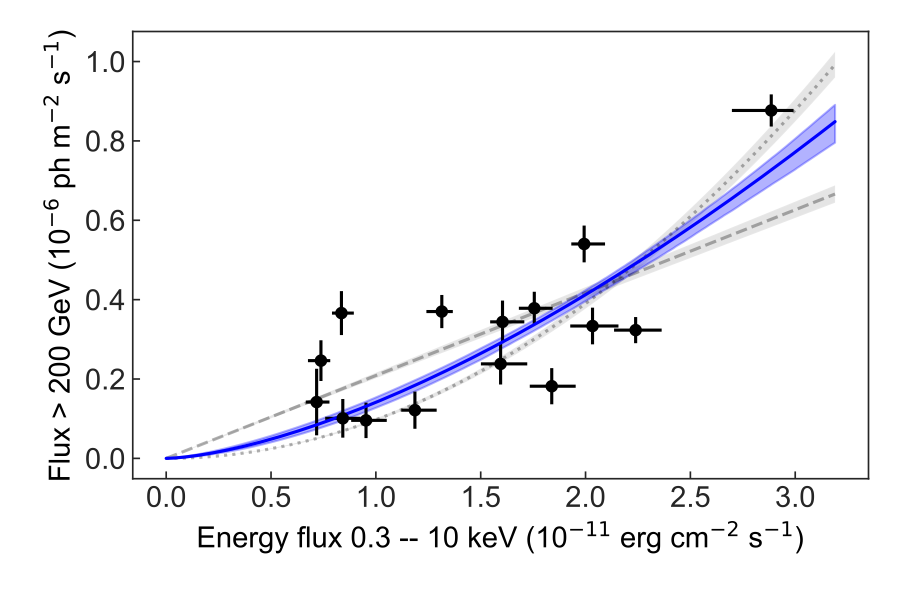 Figure 7: Scatter plot to investigate the correlation between the TeV gamma-ray flux and the X-ray energy flux. The flux measurements in the two bands were performed on the same nights. The gray dashed and dotted lines show the best linear and quadratic fits, respectively. The solid blue line shows the best power-law fit. 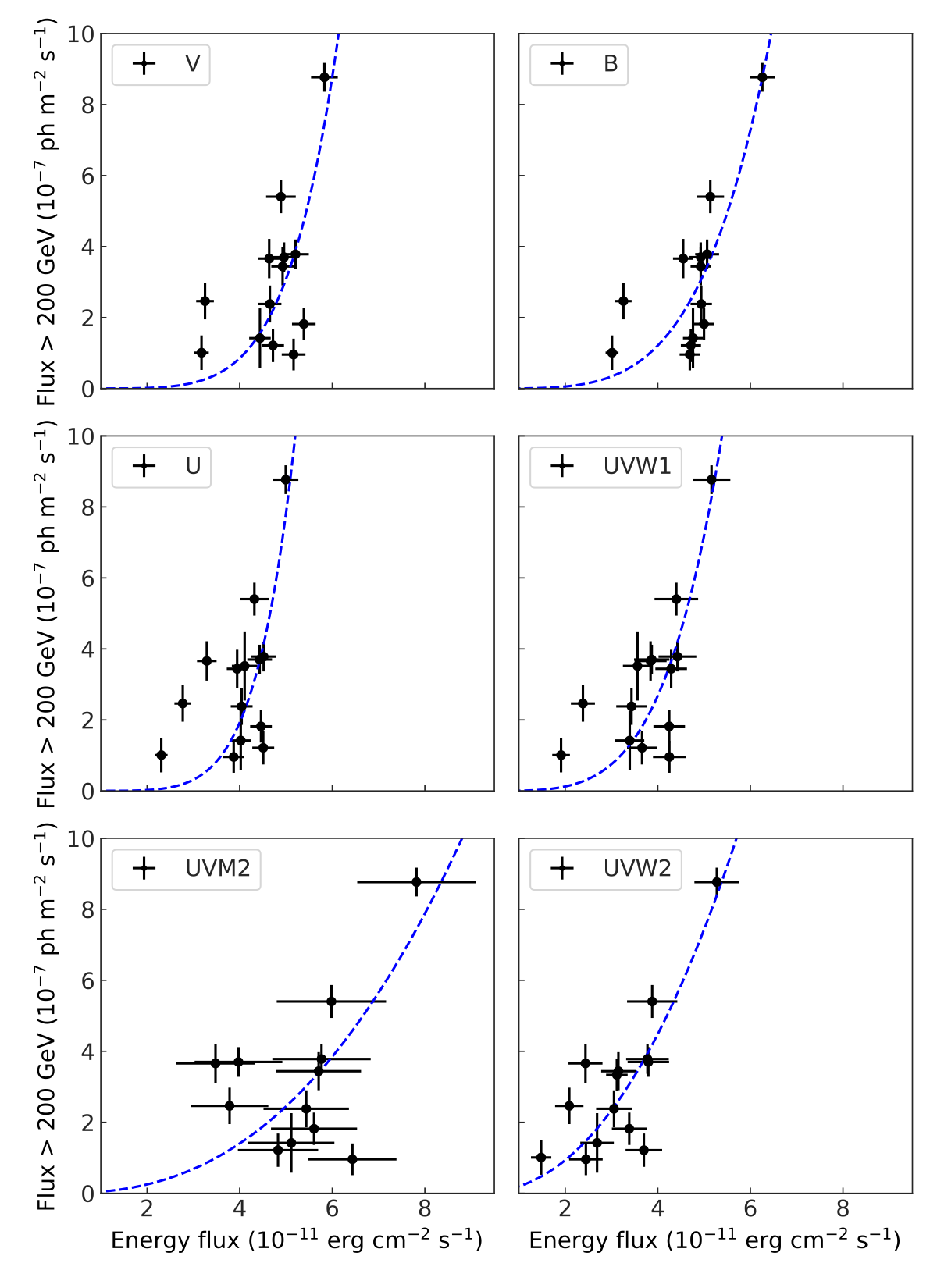 Figure 8: The correlations between the TeV gamma-ray flux and the optical/UV energy fluxes measured with the six Swift-UVOT filters. The frequency of the Swift-UVOT observations increases from the upper left panel to the lower right panel. Similar to Figure 7, the flux measurements in the two bands in each panel were performed on the same nights. The blue dashed lines show the best fit power law to guide the eye.

Figure 9: Broadband SED during the three Bayesian blocks obtained from the VERITAS light curve in the2013 to 2014 season. The solid and dotted curves show the one-zone SSC model with the parameters listed in Table 4 with and without the extragalactic background light (EBL) absorption (Franceschini et al. 2008). The blue crosses and filled diamonds, the red squares and the green filled circles represent the first (BB1), second (BB2, flaring), and the third (BB3) Bayesian blocks, respectively. Data are from Swift-UVOT, Swift- XRT, Fermi-LAT, and MAGIC (only for BB1, shown as blue filled diamonds) and VERITAS, going from
the low to high frequencies. As a comparison, the magenta downward triangles and gray upward triangles show the flaring-state and low-state SEDs in 2009 from Archambault et al. (2013). 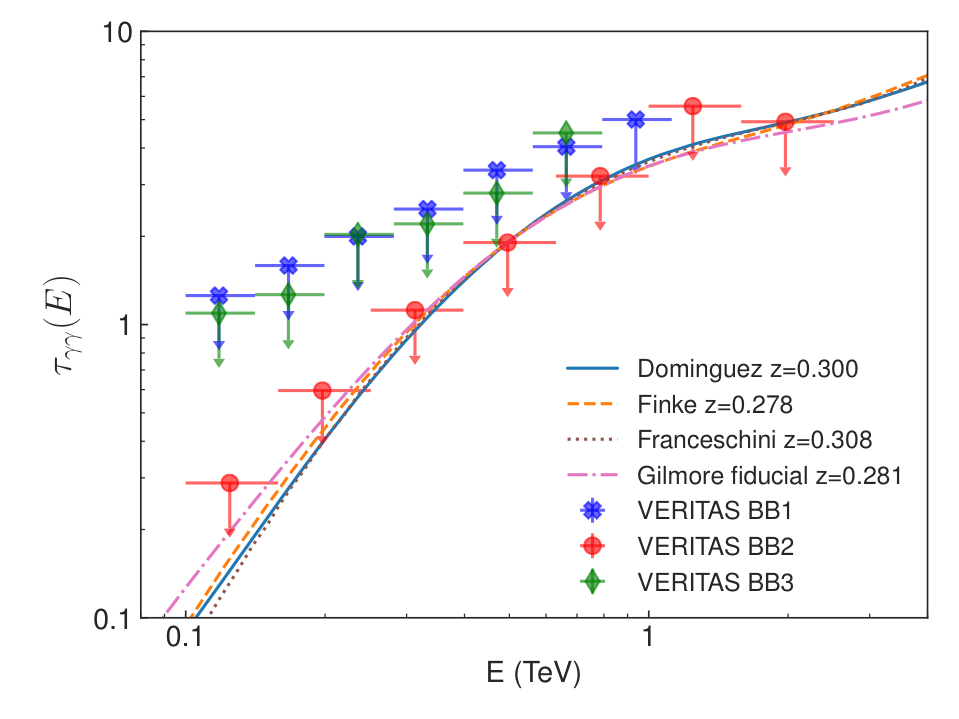