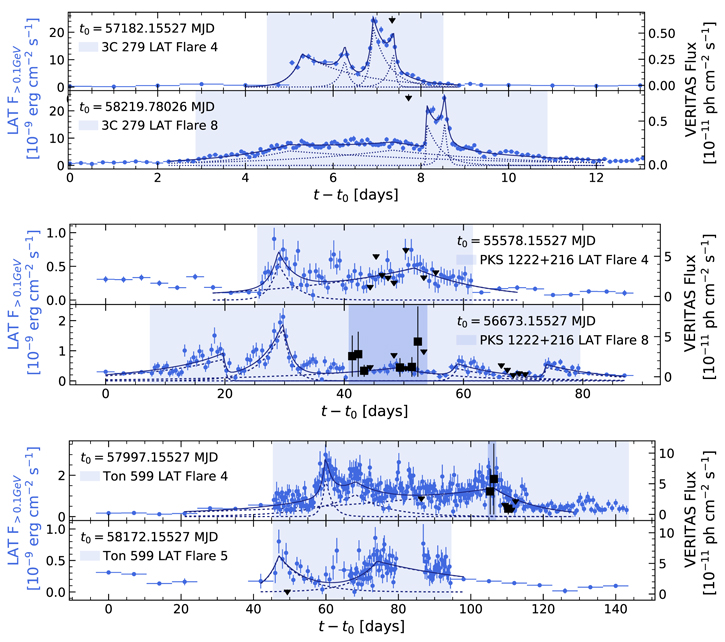 Flat spectrum radio quasars (FSRQs) are the most luminous blazars at GeV energies, but only rarely emit detectable fluxes of TeV gamma rays, typically during bright GeV flares. In this paper, we explore the gamma-ray variability and spectral characteristics of three FSRQs that have been observed at GeV and TeV energies by Fermi-LAT and VERITAS, making use of almost 100 hours of VERITAS observations spread over 10 years: 3C 279, PKS 1222+216, and Ton 599.

We explain the GeV flux distributions of the sources in terms of a model derived from a stochastic differential equation describing fluctuations in the magnetic field in the accretion disk, and estimate the timescales of magnetic flux accumulation and stochastic instabilities in their accretion disks. We identify distinct flares using a procedure based on Bayesian blocks and analyze their daily and sub-daily variability and gamma-ray energy spectra.

Using observations from VERITAS as well as Fermi, Swift, and the Steward Observatory, we model the broadband spectral energy distributions of PKS 1222+216 and Ton 599 during VHE-detected flares in 2014 and 2017, respectively, strongly constraining the jet Doppler factors and gamma-ray emission region locations during these events. Finally, we place theoretical constraints on the potential production of PeV-scale neutrinos during these VHE flares. 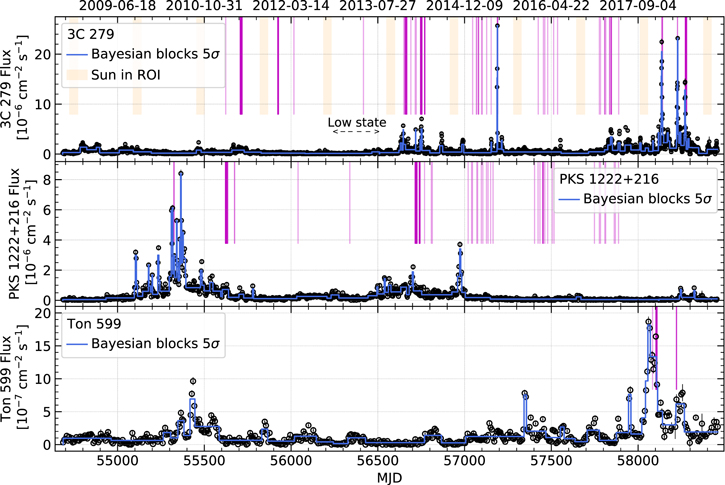 Figure 1:  Fermi-LAT light curves of 3C 279 (top), PKS 1222+216 (middle), and Ton 599 (bottom). The flux points (black circles) are shown for 1, 3, and 7 day time bins for the three sources, respectively. 5σ Bayesian blocks are shown with blue lines. The time intervals in which VERITAS observed the sources are marked in magenta. For 3C 279, time intervals in which the Sun is less than 20o from the source are shown in orange and a Fermi-LAT low state from MJD 56230-56465 (see Section 6) is marked with a dashed line.

Figure 2: Flux distributions of the three FSRQs, scaled as probability densities. The distributions are fit with a log-normal PDF (dashed orange) and the stationary-state PDF corresponding to the SDE of Tavecchio et al. (2020) (solid blue). In all three cases, the SDE provides a better fit. 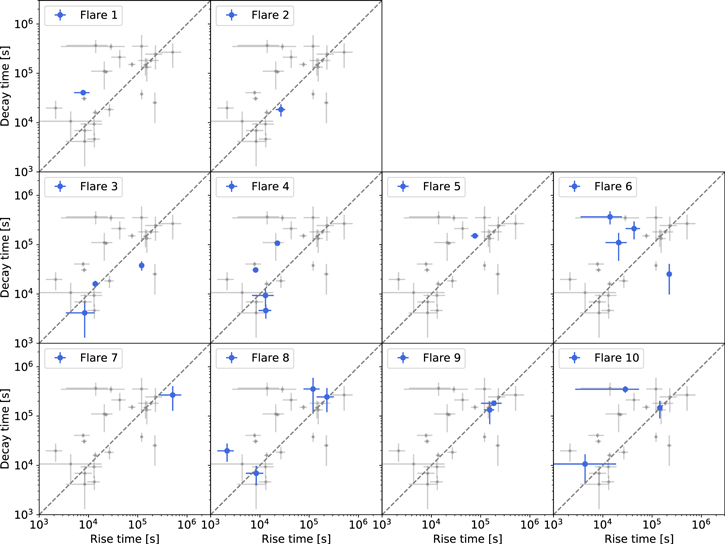 Figure 4: Decay time vs. rise time for each of the resolved exponential components in the flares of 3C 279. The points corresponding to all of the components are shown in gray. The dashed reference line shows where the rise and decay times are equal. 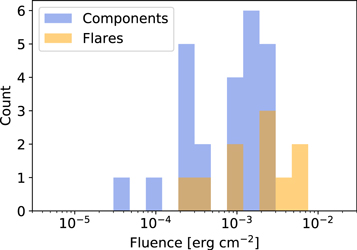 Figure 5: Fluence distributions of the twenty-four resolved are components and ten flares of 3C 279.

Figure 8: Fermi-LAT spectra of 3C 279 during ten flares, for the intervals selected using the algorithm proposed in this work and described in Section 4. For comparison, the LAT low state spectrum is shown in gray squares in all of the panels. The four flares shown in color have a corresponding spectrum in Figure 7. 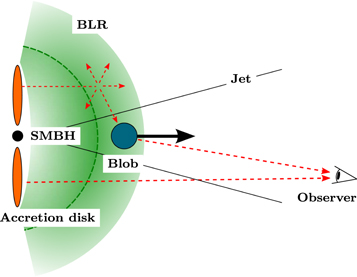 Figure 9: A schematic illustration of the emission model used in this work (not to scale). The green dashed arc represents the nominal BLR radius rBLR corresponding to the region of the maximal BLR density. The observer measures the beamed emission from the blob interacting with the BLR as well as the accretion disk's thermal emission. The accretion disk is assumed to be a point source. 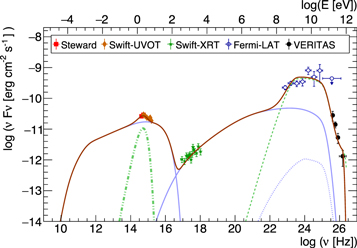 Figure 12: Constraints on the Lorentz factor Γ and distance r between the gamma-ray emission location and central black hole, adapted from Nalewajko et al. (2014). The allowed region is filled in purple. The black vertical line shows the opacity constraint on r derived from the BLR modeling. The values of Γ and r derived from the SED modeling are indicated with dashed black lines.