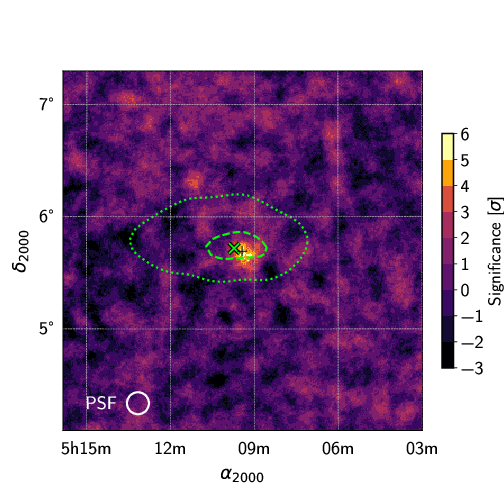 VERITAS statistical significance skymap for the region around TXS0506+054. For details, see Figure 1 below.

On September 22, 2017, the IceCube neutrino observatory announced the detection of the high-energy neutrino IC 170922A, of potential astrophysical origin. The neutrino direction was consistent with the location of the gamma-ray blazar TXS 0506+056, which was in an elevated gamma-ray emission state as measured by Fermi-LAT. Follow-up observations of the blazar led to its first detection in VHE gamma-rays by the MAGIC telescopes. The significance of the correlation between the neutrino and the flaring blazar is at the 3 sigma level, providing first evidence for the existence of an astrophysical source of high-energy neutrinos. Details of the neutrino detection and the multi-wavelength follow-up campaign (including an initial non-detection by VERITAS) are presented in the IceCube paper linked above.

The potential association with an astrophysical neutrino event has made TXS 0506+056 a source of particular interest, and extended VERITAS observations were collected between September 2017 and February 2018 to characterize its high-energy emission. In this work we present results from the analysis of 35 hours of VERITAS data collected during this period, which resulted in the VHE detection of the blazar at a statistical significance of 5.8 sigma.

The average integral photon flux during this period was (8.9 ± 1.6)×10-12 cm-2 s-1 above an energy threshold of 110 GeV, which corresponds to 1.6% of the Crab Nebula flux above the same energy threshold. The VHE photon spectrum measured by VERITAS is well characterized by a power-law, with a soft spectral index of 4.8 ± 1.3. The VHE integral flux observed by VERITAS is consistent with a constant in time, at a comparable level as the source flux reported in the Fermi-LAT 3FHL catalog in a similar energy range.  The analysis of Fermi-LAT data in the GeV range indicates that the integral photon flux was variable during the period of VERITAS observations, with a steady photon index consistent with catalogued values. Swift XRT observations indicate variability in both photon index and integral flux, but no temporal correlation is evident between the X-ray, GeV, and VHE energy ranges.

The study of the gamma-ray SED of TXS 0506+056 shows an exponential cutoff in the photon spectrum between the Fermi and VERITAS energy ranges, which cannot be explained as being caused by EBL absorption alone. This has important implications, since the emission of >100 TeV neutrino such as IC 170922A is expected to be accompanied by hadronic gamma rays in a similar energy range. The spectral softening requires either a break in the parent particle population or intrinsic absorption of the potential hadronic VHE emission at the source in order to explain these observations.

The detection of TXS 0506+056 representes the first time that neutrino follow-up observations have revealed a new VHE source. Future observations could clarify if blazars are indeed the sources of astrophysical neutrinos
detected by IceCube.

Figure 1:  VERITAS statistical signifi cance sky map for the region around TXS 0506+056. The VLBA radio location of the blazar is indicated with a `+' marker. The size of the VERITAS point spread function for this analysis, at 68% containment, is shown as a white circle in the lower left. The `x' marker indicates the best- fit position of IC 170922A, withdashed (dotted) lines indicating the 50% (90%) con fidence-level regions for the neutrino
location (from IceCube Collaboration et al. (2018)). 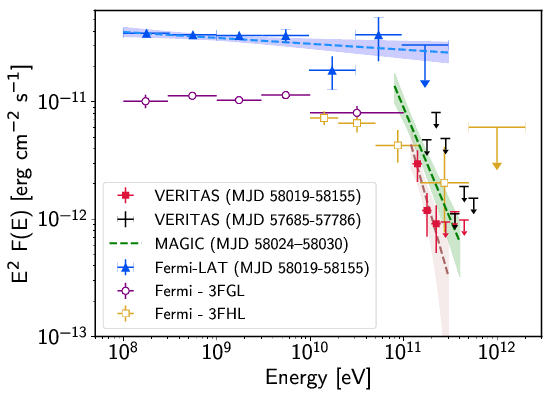 Figure 2: Gamma-ray SED of TXS 0506+056 from Fermi-LAT and VERITAS observations collected in the period MJD 58019-58155. Given that the observations are not strictly simultaneous, spectral variability of the source cannot be ruled out. The VHE spectrum of the source as measured by MAGIC within two weeks of the detection of IC 170922A is also shown (IceCube Collaboration et al. 2018). For comparison, the Fermi-LAT 3FGL (purple) and 3FHL (orange) catalog fluxes of the source are shown, as well as 95% CL upper limits from VERITAS archival observations (black) described in Section 2.1. Best-fi t power laws are shown as dashed lines for each data set collected in the MJD 58019-58155 period, with color bands indicating 68% statistical uncertainties on the fit. 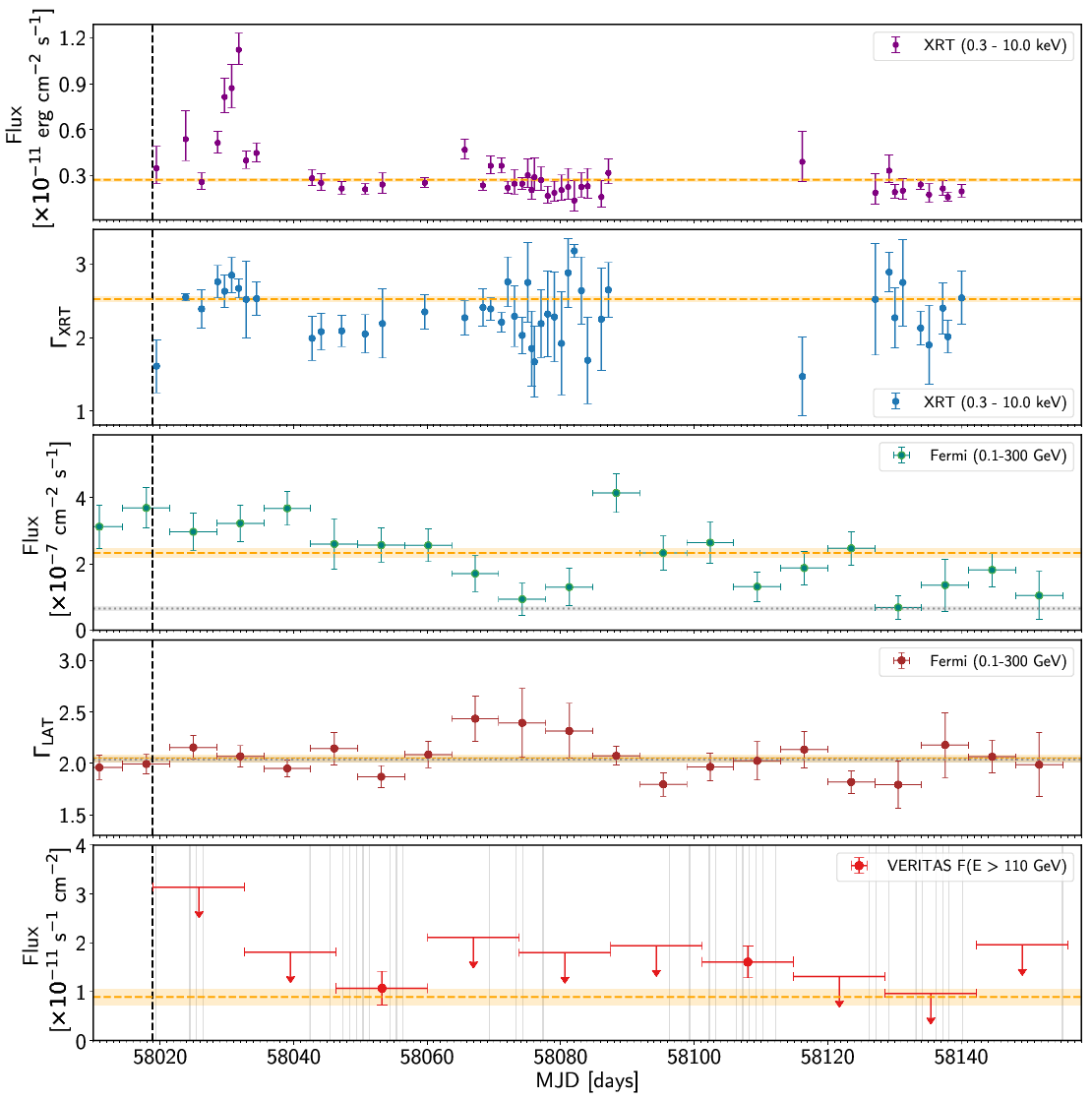 Figure 3: Multiwavelength light curves for TXS 0506+056 derived from Swift, Fermi-LAT and VERITAS observations. The dashed vertical line shows the time of detection of the IC 170922A neutrino event. In each panel, the horizontal dashed line and band indicate the mean and 1σ uncertainty of each parameter for the entire period. The catalog flux and spectral index values, and their uncertainties, are shown as gray lines and bands in the Fermi-LAT panels. The VERITAS light curve is shown using ten bins, where each point represents the average flux level of the source during the VERITAS observations collected in that period (shown as vertical gray bands). The upper limits and flux points do not constrain the potential variability of the source during periods in which VERITAS was not observing the blazar. 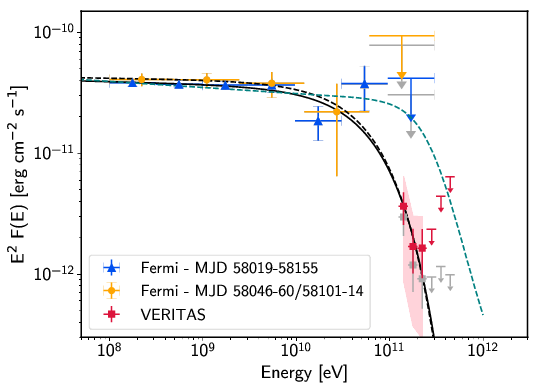 Figure 4: Power-law fi t with an exponential cuto ff to the de-absorbed gamma-ray SED of TXS 0506+056 using Fermi-LAT data from the period MJD 58019-58155 (solid black line) and MJD 58046-60/58101-58114 (dashed black line). De-absorbed flux points are shown in color, and observed fluxes in gray. The teal dashed line shows an extrapolation of the Fermi-LAT fit from Subsection 2.2 to VHE energies that accounts for EBL absorption using
the model of Franceschini et al. (2008). The pink band in the VHE range illustrates the energy-scale systematic uncertainty on the VERITAS spectrum.