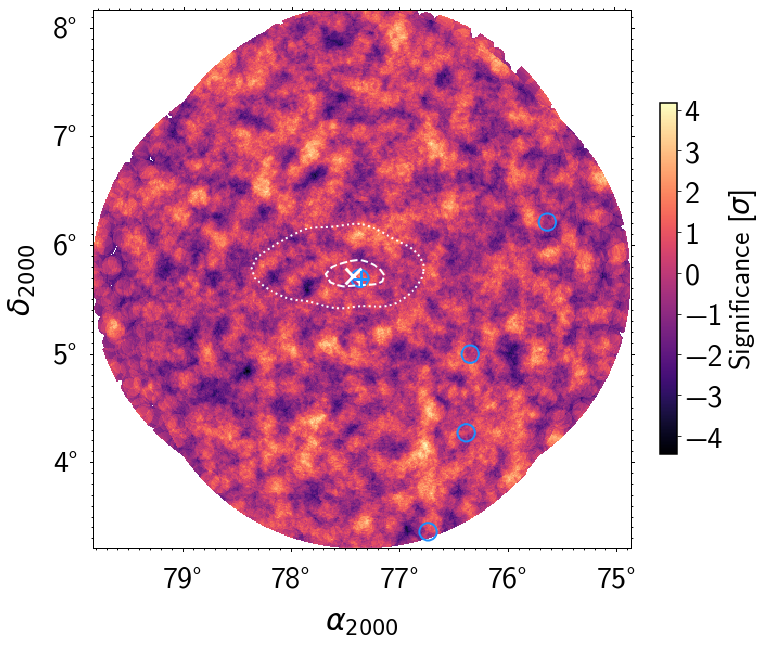 See also: another IceCube paper here, and the Icecube home page here, and a VERITAS paper on further observations of TXS 0506+054 here.

In 2013 the IceCube collaboration announced the detection of a diffuse flux of astrophysical neutrinos in the TeV-PeV range. The source of this neutrino flux remains unknown. To aid in the identification of the neutrino sources VERITAS, among other observatories around the world, routinely performs follow-up observations of high-energy neutrino alerts sent by IceCube in search for potential electromagnetic counterparts.

On September 22, 2017 IceCube broadcast an alert announcing the detection of a high-energy neutrino event with an energy of ~290 TeV, named IceCube-170922A. The position of the neutrino was consistent with the sky location of the active galaxy TXS 0506+056, a known gamma-ray emitter. The galaxy was first observed to be flaring in gamma rays by the Fermi-LAT space telescope and subsequent observations resulted in the first detection of TXS 0506+056 in the very-high-energy gamma-ray range (VHE, E > 100 GeV) by the MAGIC telescopes. These results, as well as additional observations covering the entire electromagnetic spectrum, are presented in this paper.

The chance coincidence of the neutrino event with the flare of TXS 0506+056 is statistically disfavored at the level of three standard deviations, presenting first evidence for a potential electromagnetic astrophysical counterpart to a high-energy neutrino event.

VERITAS observations of the IceCube-170922A region started on September 23, 2017 at 09:06 UTC, 12.2 hours after the IceCube detection. A one-hour exposure was collected under partial cloud coverage in normal observation mode. Five additional hours were collected during the period between September 28 at 08:57 UTC and September 30, 2017 at 11:04 UTC (5.5 to 7.6 days after the neutrino detection) following the Fermi-LAT report of a hard GeV gamma-ray flare from the blazar TXS 0506+056 in the neutrino error region. The final VERITAS data set included in this paper consists of 5.5 hours of quality-selected data obtained up to two weeks after the neutrino event.

A significance skymap for the VERITAS data is shown below, including the best fit position (white ‘x’ marker) and error region for the IceCube-170922A event at the 50% (white, dashed) and 90% (white, dotted) containment level. Also shown in the skymap are the locations of sources from the Fermi-LAT 3FGL catalog as blue circles, with TXS 0506+056 further indicated as a blue ‘+’ sign. No significant gamma-ray excess is observed at the location of TXS 0506+056 or anywhere in the VERITAS field of view. The significance skymap is available in FITS format from the link below.