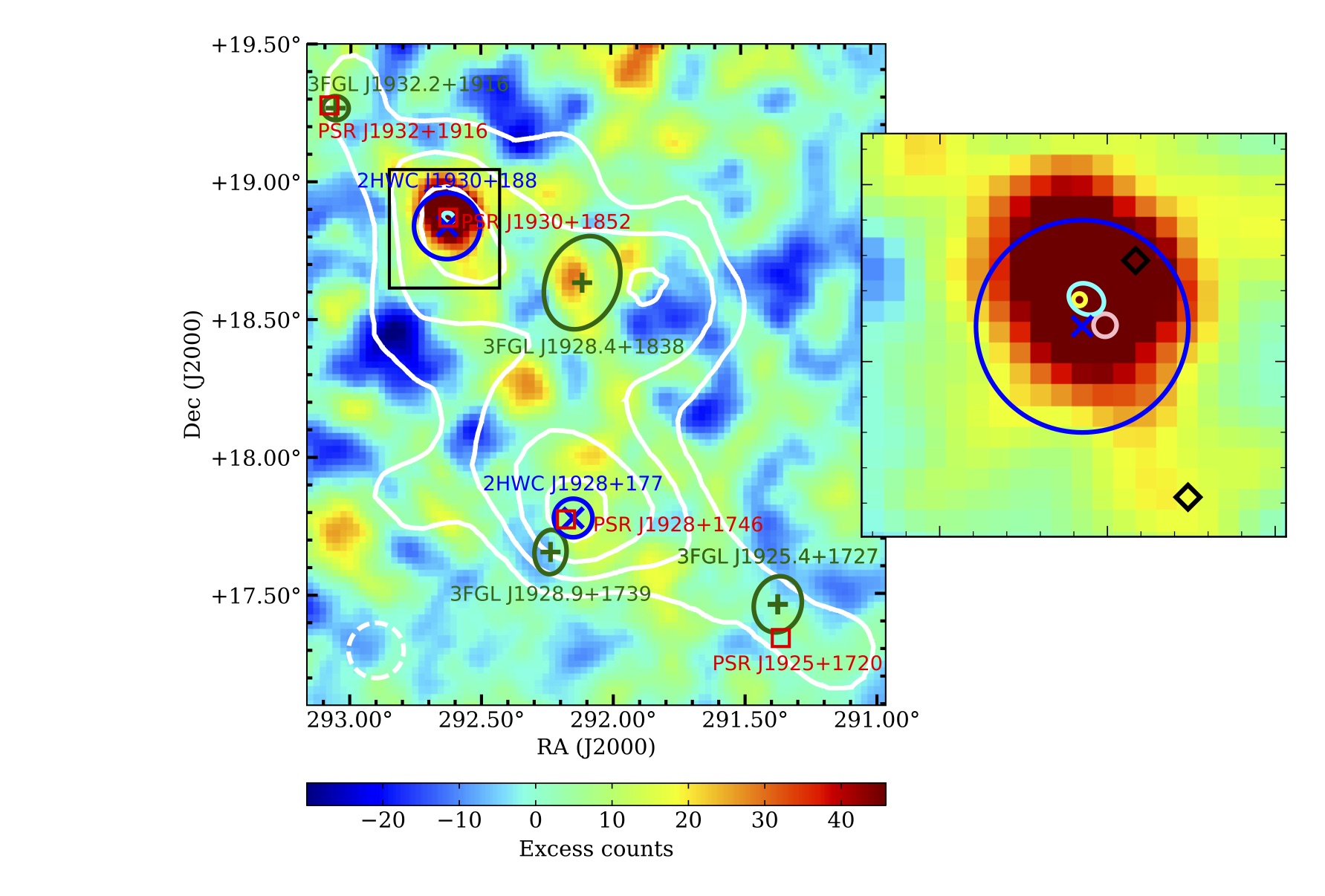 Direct detection of gamma-rays carried out by satellite-based instrumentation, such as the Large Area Telescope (LAT) on board the Fermi Gamma-ray Space Telescope, can detect gamma-rays with low background, and survey the whole sky every three hours. However, due to the small effective area (2), the sensitivity peaks at a few GeV. Meanwhile the ground-based observatories are best suited to study gamma-ray emission at energies higher than 100 GeV. Ground-based imaging atmospheric Cherenkov telescope arrays, such as VERITAS, provide the best instantaneous sensitivity with good energy resolution (~20%) and angular resolution (30 TeV. However, the duty cycle is <20% because the observation requires clear, dark skies, and the technique has a small field of view (currently Air shower arrays, such as HAWC, have a lower instantaneous sensitivity and worse energy and angular resolution compared to imaging atmospheric Cherenkov telescope arrays. But, the field of view covers ~15% of the sky, and the duty cycle is larger than 90%. The most powerful approach, therefore, is to combine observations from all three methods. Only a few examples of this exist due to limited overlapping source catalogs.

The HAWC collaboration recently published their 2HWC catalog, listing 39 very high energy (VHE; >100 GeV) gamma-ray sources based on 507 days of observation. Among these, there are nineteen sources that are not associated with previously known TeV sources. We have studied fourteen of these sources without known counterparts with VERITAS and Fermi-LAT.

VERITAS detected weak gamma-ray emission in the 1 TeV-30 TeV band in the region of DA495, a pulsar wind nebula coinciding with 2HWC J1953+294, confirming the discovery of the source by HAWC. The flux measured by VERITAS is about seven times lower than the flux reported by HAWC. This may be due to the overestimation of HAWC's flux caused by unaccounted diffuse emission in the region. We did not find any counterpart for the selected fourteen new HAWC sources from our analysis of Fermi-LAT data for energies higher than 10 GeV. During the search, we detected GeV gamma-ray emission coincident with a known TeV pulsar wind nebula, SNR G54.1+0.3 (VER J1930+188), and a 2HWC source, 2HWC J1930+188.

The fluxes for isolated, steady sources in the 2HWC catalog are generally in good agreement with those measured by imaging atmospheric Cherenkov telescopes. However, the VERITAS fluxes for SNRG54.1+0.3, DA495, and TeV J2032+4130 are lower than those measured by HAWC and several new HAWC sources are not detected by VERITAS. This is likely due to a change in spectral shape, source extension, or the influence of diffuse emission in the source region.

Figure 2: Integrated photon flux comparison between HAWC and VERITAS. For the comparison, the energy range of the VERITAS analysis shown with red filled blocks in Figure 1 was used. The error bars for the HAWC flux are statistical errors derived from the propagation of statistical errors on the normalization factors and indices. The systematic error of the HAWC flux is shown with blue horizontal ticks. VERITAS flux upper limits are calculated assuming a power law distribution with HAWC’s spectral index for each source.

Figure 3: VERITAS gamma-ray counts map of the SNRG54.1+0.3 region with point source search cuts. The cut used for the study, <0.1◦, is shown as a white dashed circle. The extension of the radio emission from SNRG54.1+0.3 (Lang et al. 2010) is shown with a cyan ellipse. A zoomed 0.36◦ by 0.36◦ view around SNRG54.1+0.3 is shown on the right inset within the black box. The centroid of a known TeV source, VERJ1930+188, measured by VERITAS, is shown with a yellow circle in the right inset. The centroid of the source measured by H.E.S.S. is shown with a pink circle in the inset. In the region around VERJ1930+188, Fermi -LAT data are best described with a model with two point sources whose locations are indicated with black diamond markers. The point source coinciding with the VERITAS source has a TS value of 23, while the other source has a TS value of 17. The four dark green crosses are the locations of 3FGL sources with dark green ellipses showing the 1σ uncertainty of the location. The two blue x marks
indicate the centroids of two HAWC sources in the region with 1 σ uncertainty of the position marked with blue circles. Four pulsars with a spin-down luminosity higher than 1035 erg s−1 are marked with red boxes. White contours are HAWC’s significance contours of 5, 6, 7, and 8σ .

Figure 4: SEDs for sources in the SNRG54.1+0.3 region. The upper panel shows the SED of SNRG54.1+0.3, and the lower panel shows the existing
models for SNRG54.1+0.3 together with the SED. The blue contours show the 1 σ confidence interval of HAWC’s spectrum measurements for a single power law distribution (filled) and for a power law with a cutoff (empty). Red points and upper limits are the VERITAS measurements. Green colored rectangles and upper limits are the measurements of the newly detected Fermi source in the SNRG54.1+0.3 region. The green filled area shows the 1 σ confidence interval estimated by using the statistical errors of the Fermi spectral analysis. The black dotted line shows the best fit leptonic model from Li et al. (2010), and the light blue short dashed line shows the lepton-hadron model from Tanaka & Takahara (2011). The orange broken dashed line and the magenta solid line show models from Torres et al. (2014) and Gelfand et al. (2015). 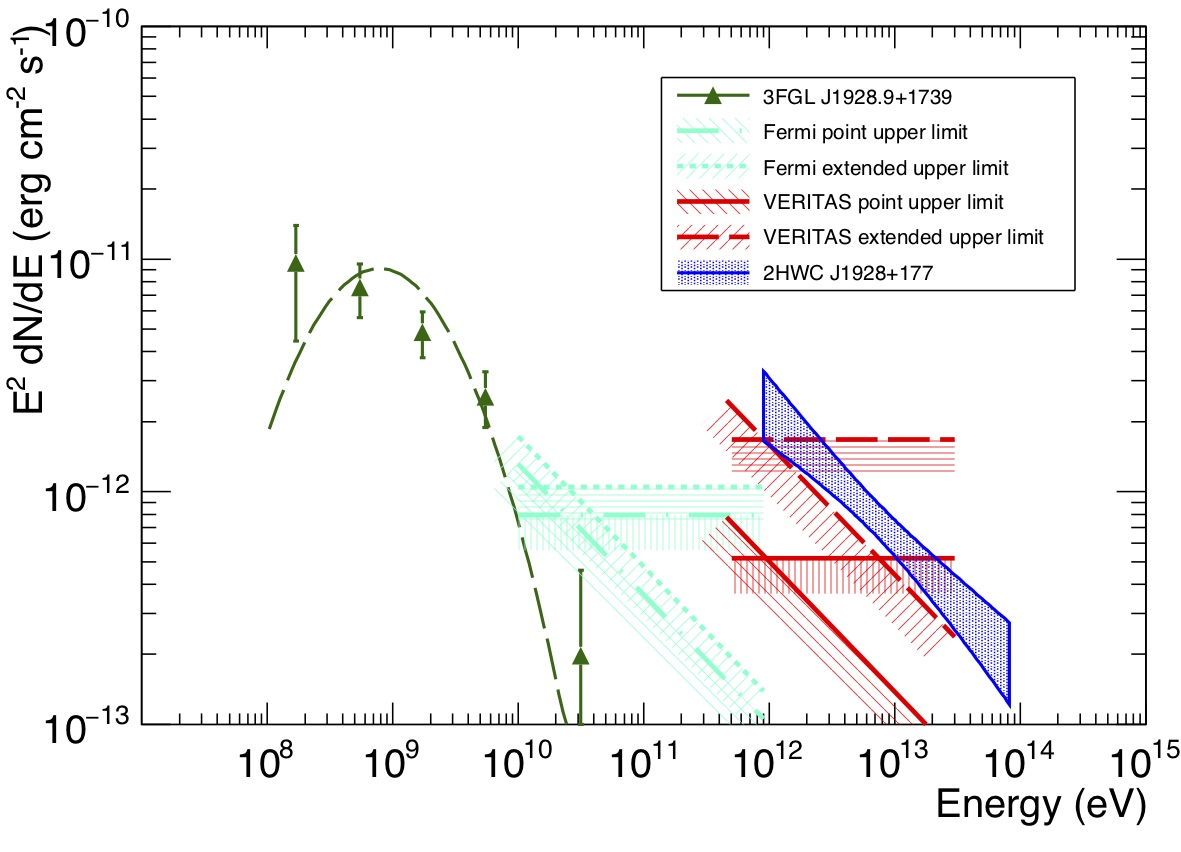 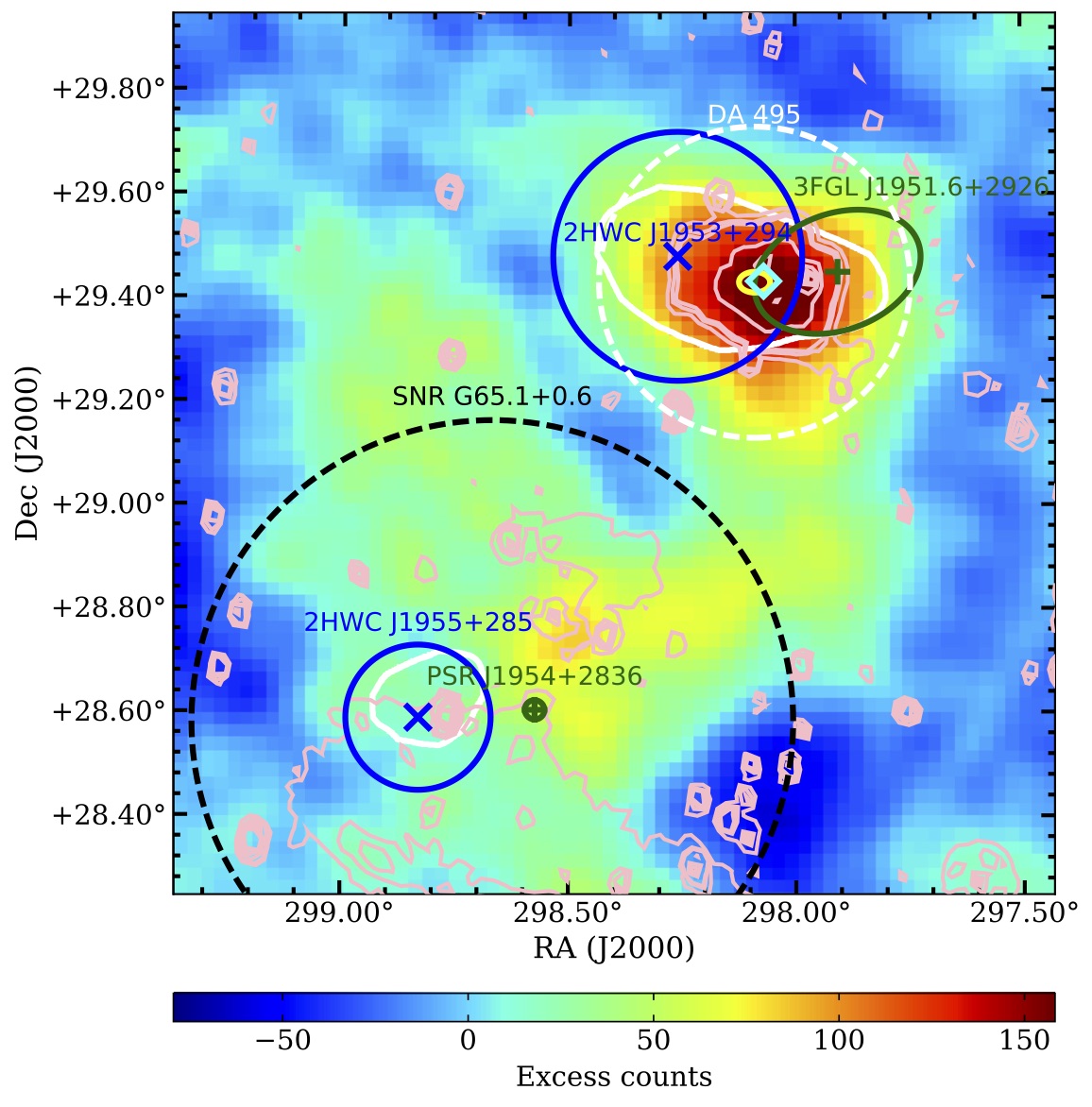 Figure 6: VERITAS gamma-ray counts map of the PWN DA495 and the surrounding region with extended source search cuts, <0.3◦. The region used for the spectral analysis with VERITAS data is shown with a white dashed circle. The yellow circle is the centroid measured by VERITAS. Two dark green crosses and ellipses are the location and 1σ uncertainty of the location of 3FGL sources. Blue x marks indicate the centroids of two HAWC sources in the region with blue circles showing 1σ uncertainty. White contours are HAWC’s significance contours of 5 σ. The cyan diamond is the location of an X-ray compact source, 1WGA J1952.2+2925 (Arzoumanian et al. 2004). Light pink contours show the radio contours around PWN DA495 measured by the Canadian Galactic Plane Survey in the 1.42 GHz band (Taylor et al. 2003). The extension of radio emission from SNR G65.1+0.6 is marked with a dashed black line. 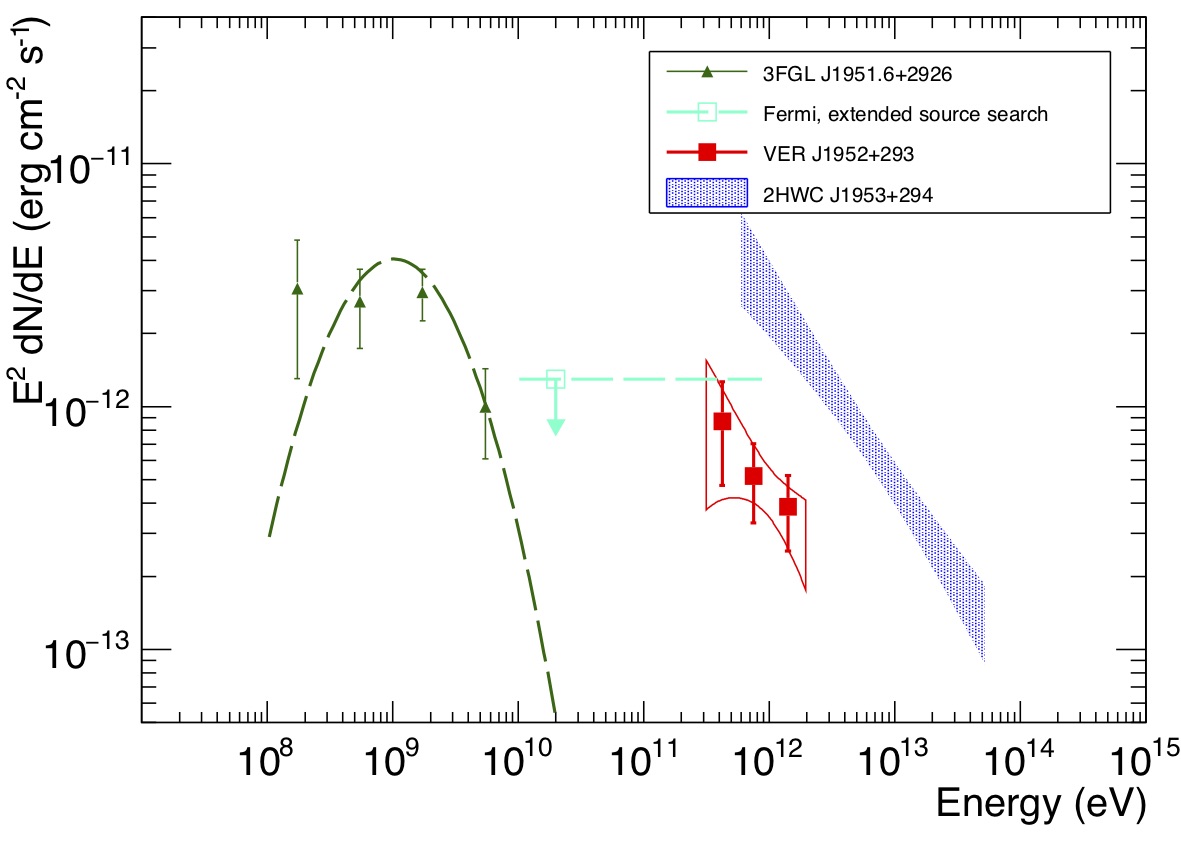 Figure 7: Fermi -LAT, VERITAS, and HAWC flux measurements in the vicinity of the PWN DA495. Green triangle points and dashed line show the flux of nearby 3FGL sources, 3FGL J1951.6+2926. The teal colored rectangular points are the upper limits of Fermi -LAT data assuming the extension of the source to be 25′. Blue filled regions are HAWC’s flux measurements. Red circles show the upper limits from VERITAS and red squares are the flux
measurement from VERITAS with <0.3o.

Figure 9: Spectral index (left) and integral flux (right) comparisons between HAWC and IACTs for known TeV sources. The energy range used to calculate the integrated flux for each source was chosen to start at the threshold value for the IACT measurement and end at 30 TeV. Red lines are for case that the two measurements exactly match. 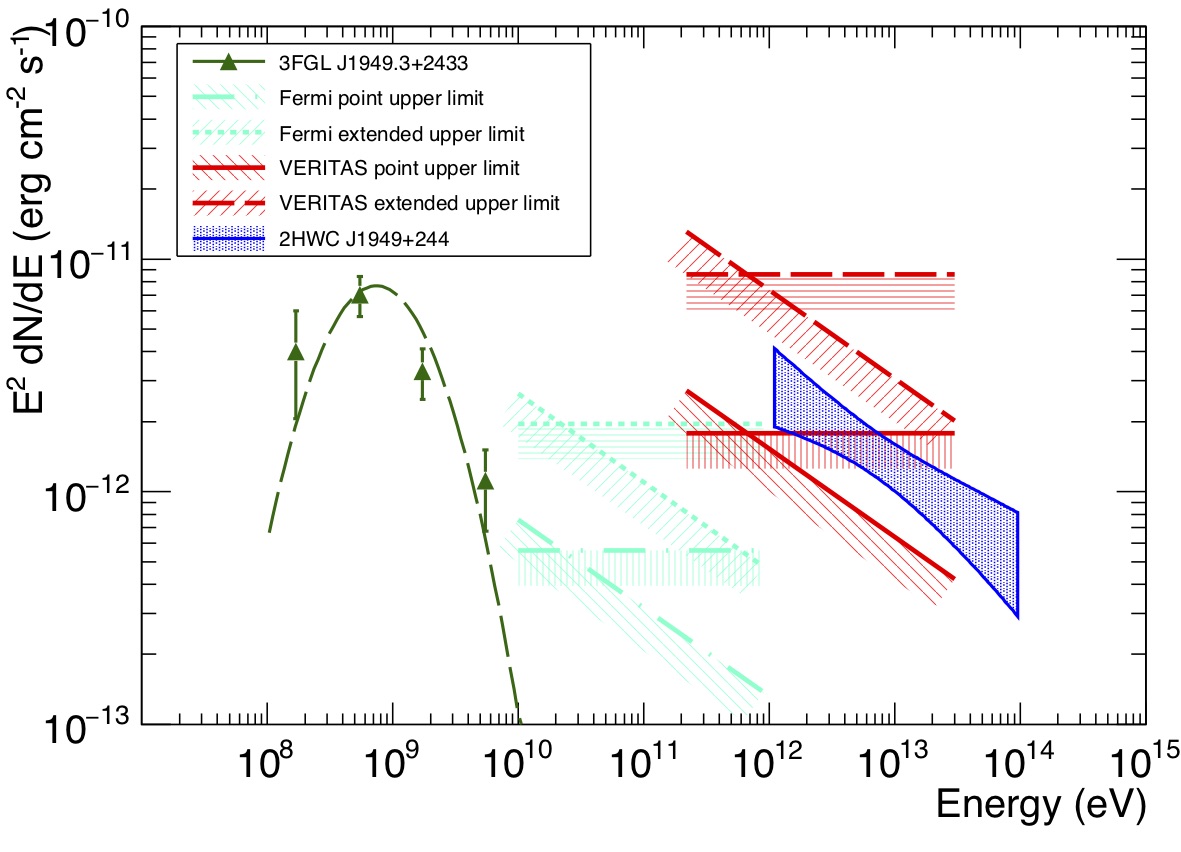 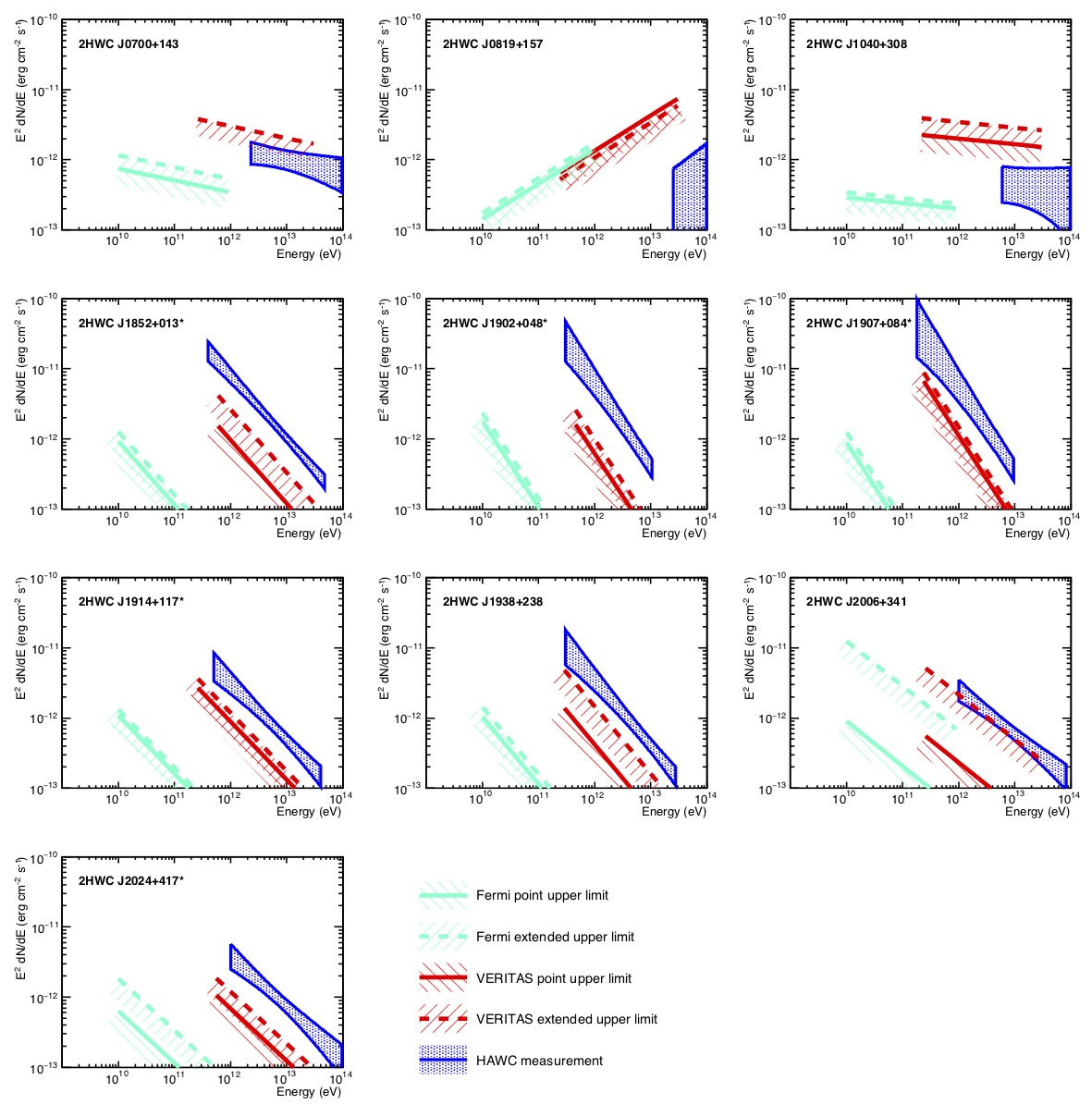 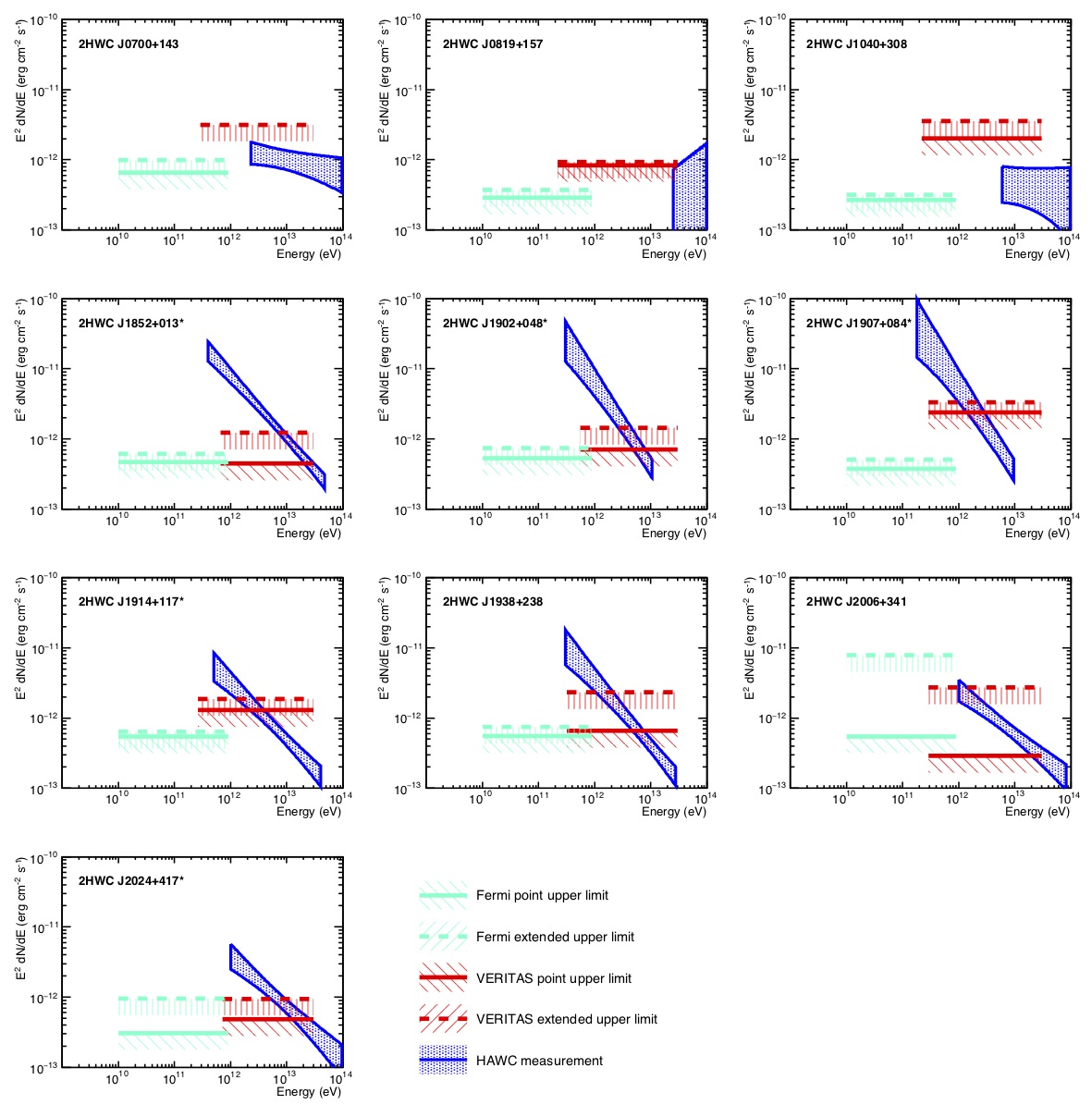