Measurement of the Iron Spectrum in Cosmic Rays by VERITAS

The energy spectrum of cosmic-ray iron nuclei as measured by the VERITAS experiment compared to previous measurements. See Figure 5 below for details.

We present a new measurement of the energy spectrum of iron nuclei in cosmic rays from 20 to 500 TeV. The measurement makes use of a template-based analysis method, which, for the first time, is applied to the energy reconstruction of iron-induced air showers recorded by the VERITAS array of imaging atmospheric Cherenkov telescopes. The event selection makes use of the direct Cherenkov light which is emitted by charged particles before the first interaction, as well as other parameters related to the shape of the
recorded air shower images. The measured spectrum is well described by a power law over the full energy range, with index gamma = 2.82 ± 0.30 (stat.) +0.24 -0.27(syst.) and normalization f0 = (4.82 ± 0.98 stat. +2.12 -2.70 syst ) × 10-7 / ( m2 s sr TeV) at pivot energy E0=50 TeV, with no indication of a cutoff or spectral break. The measured differential
flux is compatible with previous results, with improved statistical uncertainty at the highest energies. 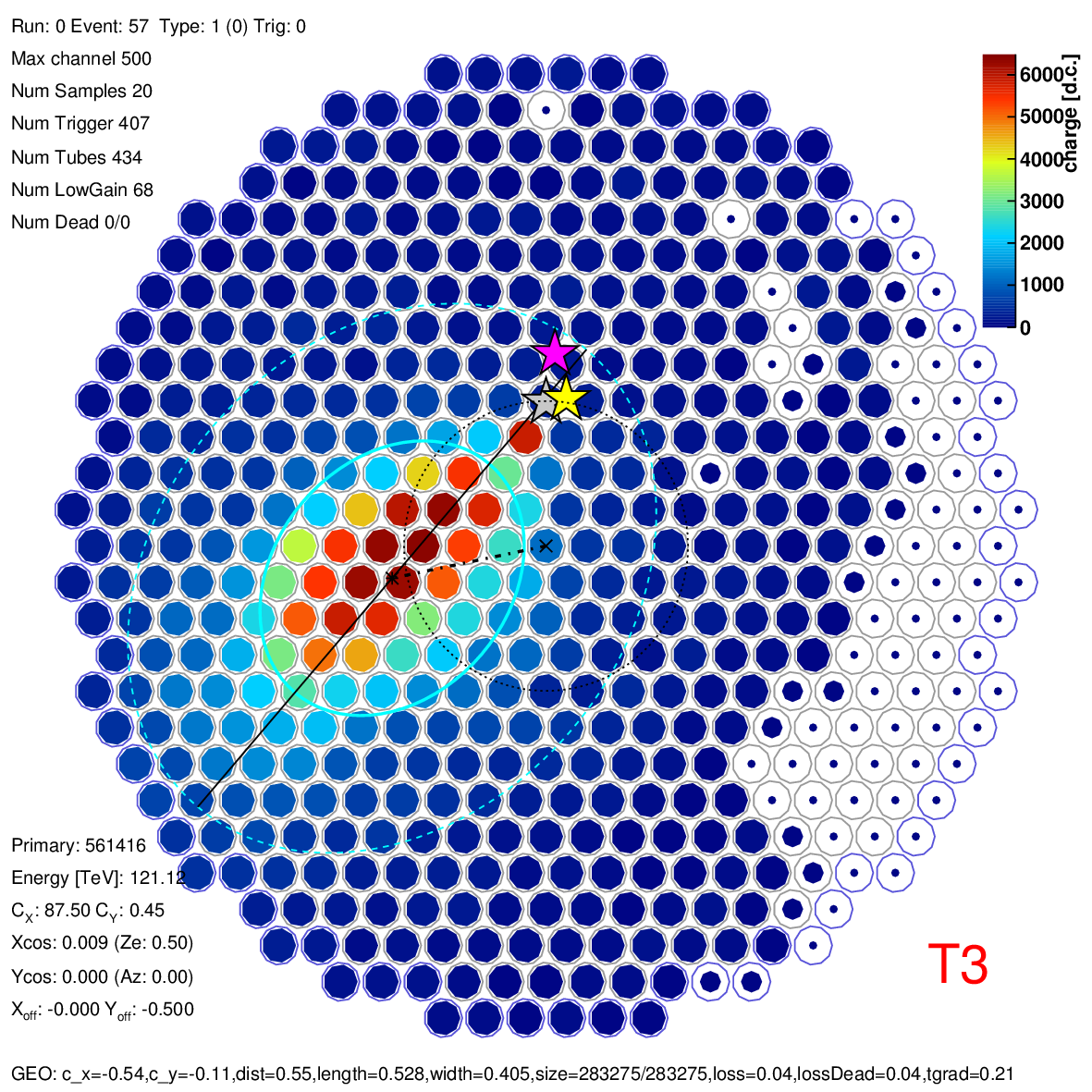 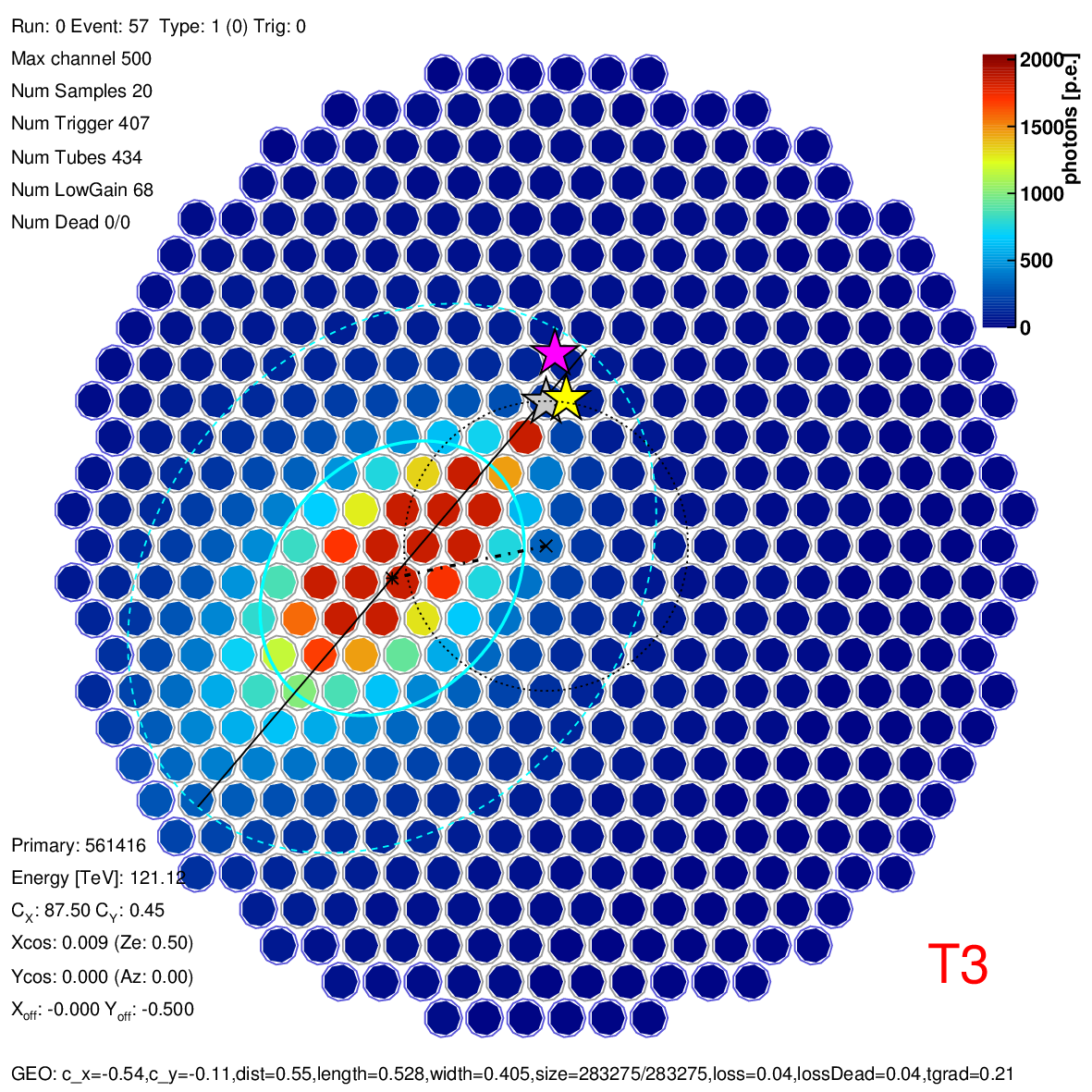 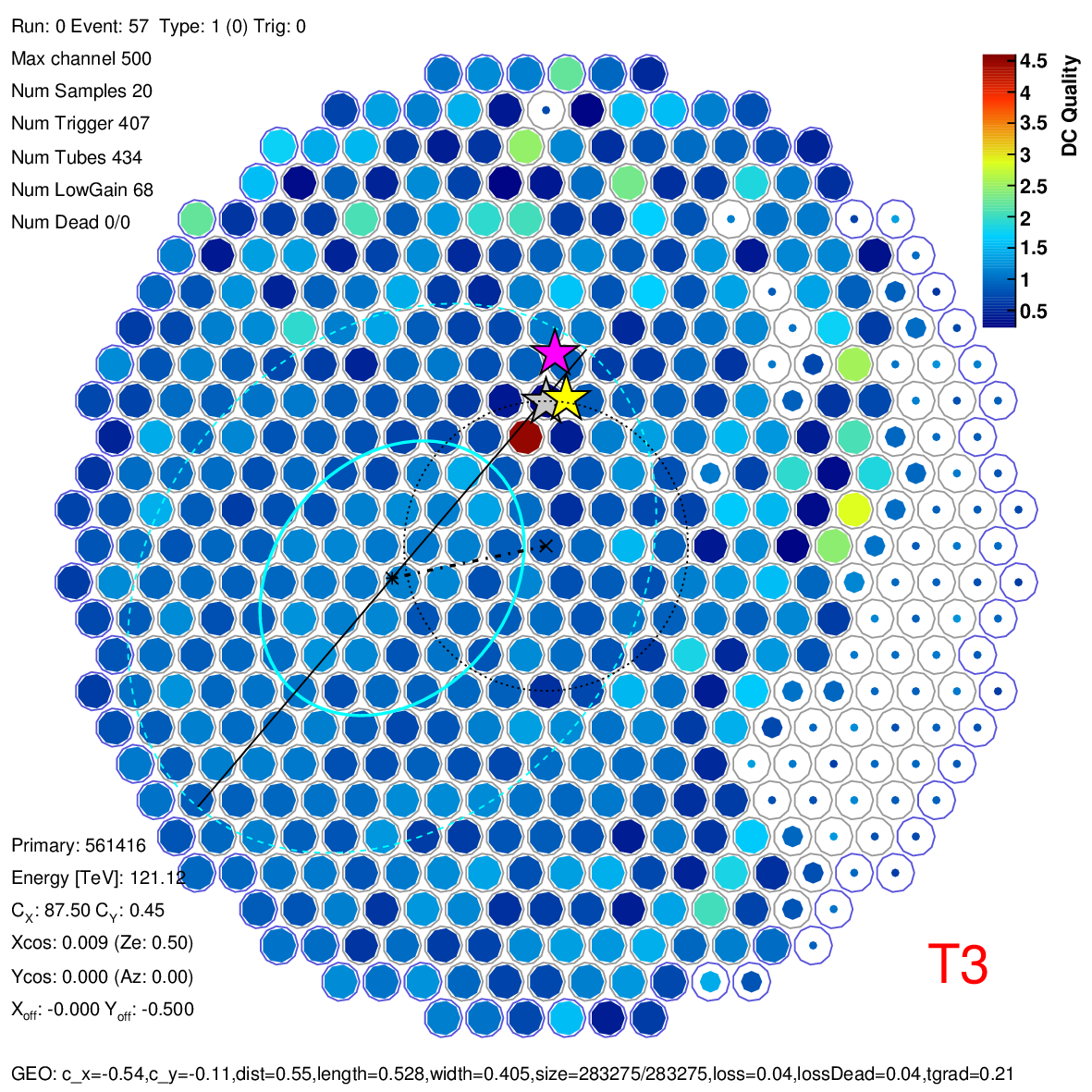 Figure 2: Simulated 121 TeV iron shower image in one of the VERITAS telescopes. There is a visible contribution from DC light. Gray star: true shower direction. Pink star: shower direction reconstructed by the moment analysis. Yellow star: shower direction reconstructed by the template analysis. The white pixels do not contain a significant amount of signal on top of the pedestal. (a) Integrated charge per pixel. (b) Best-fit image template. (c) DC quality factor for the simulated image. 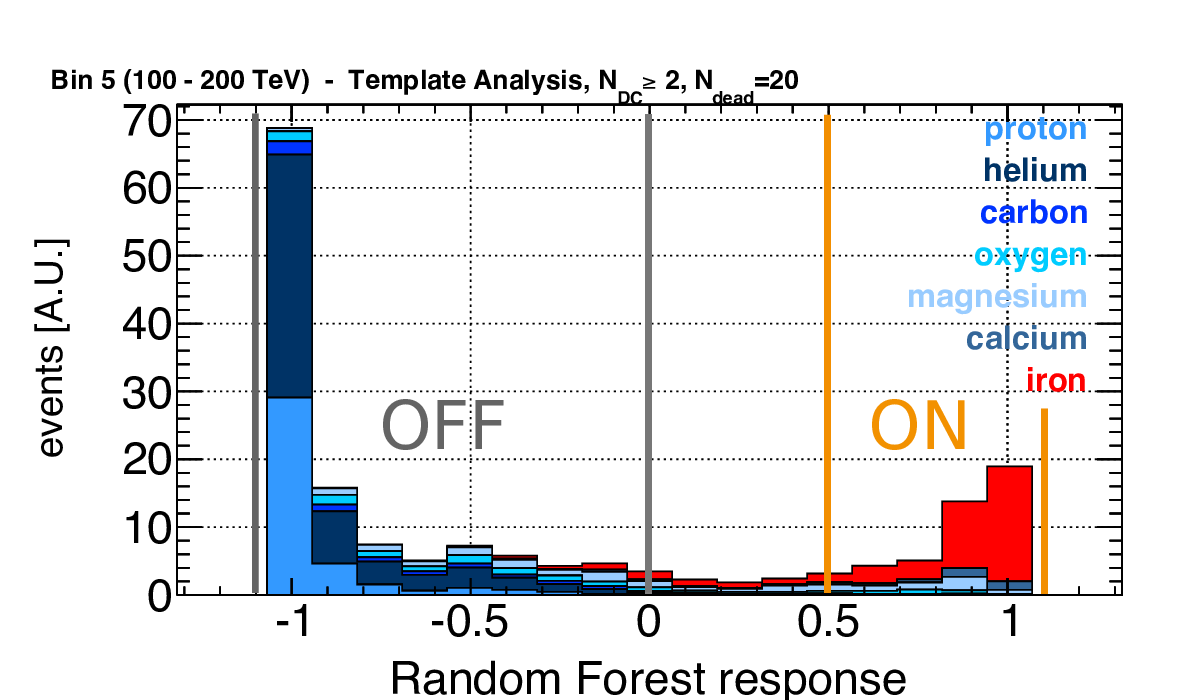 Figure 3: Response of the random forest classifier (stacked histograms) in the first energy bin from 100 to 200 TeV. ON and OFF regions have been marked. 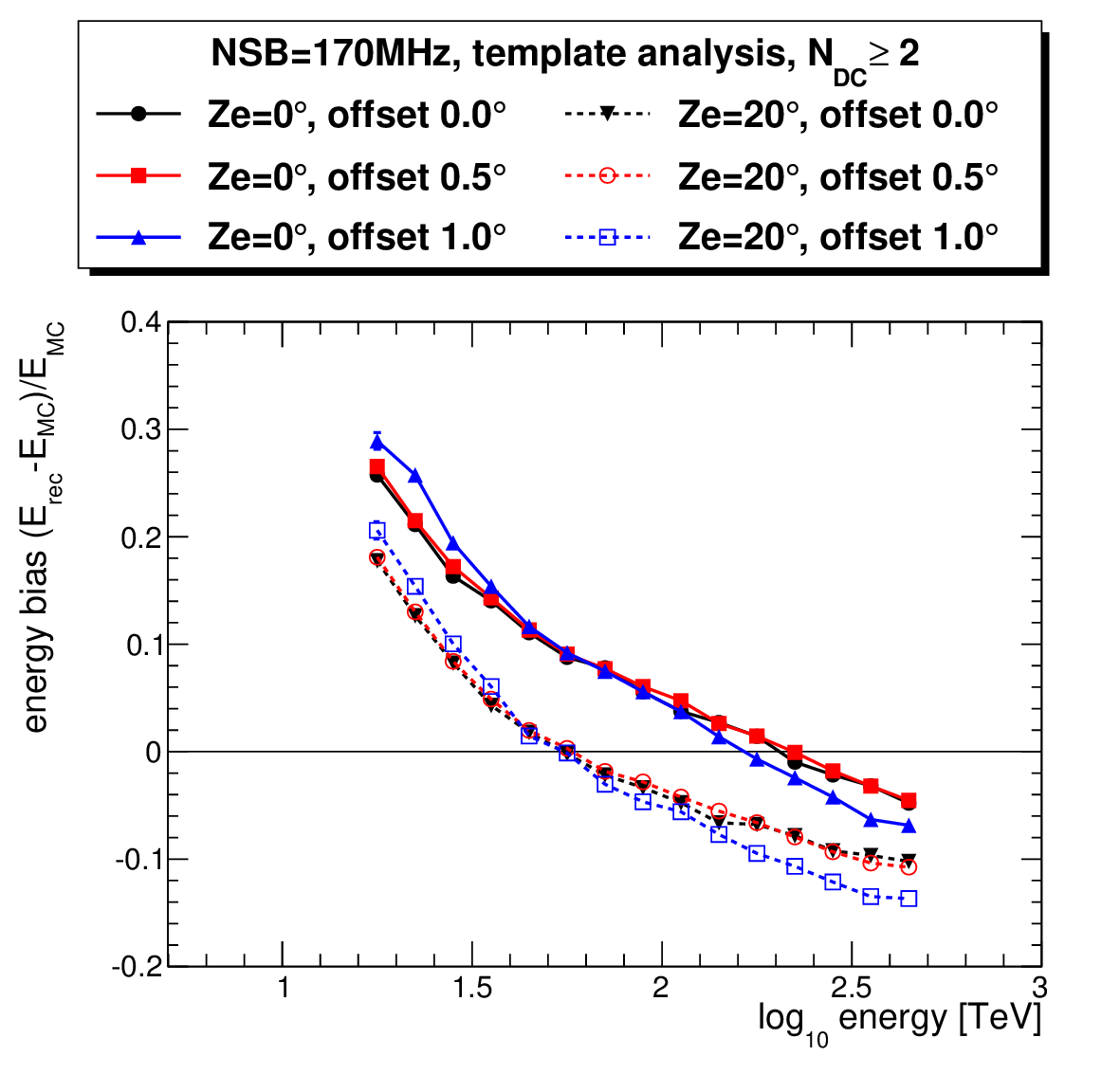 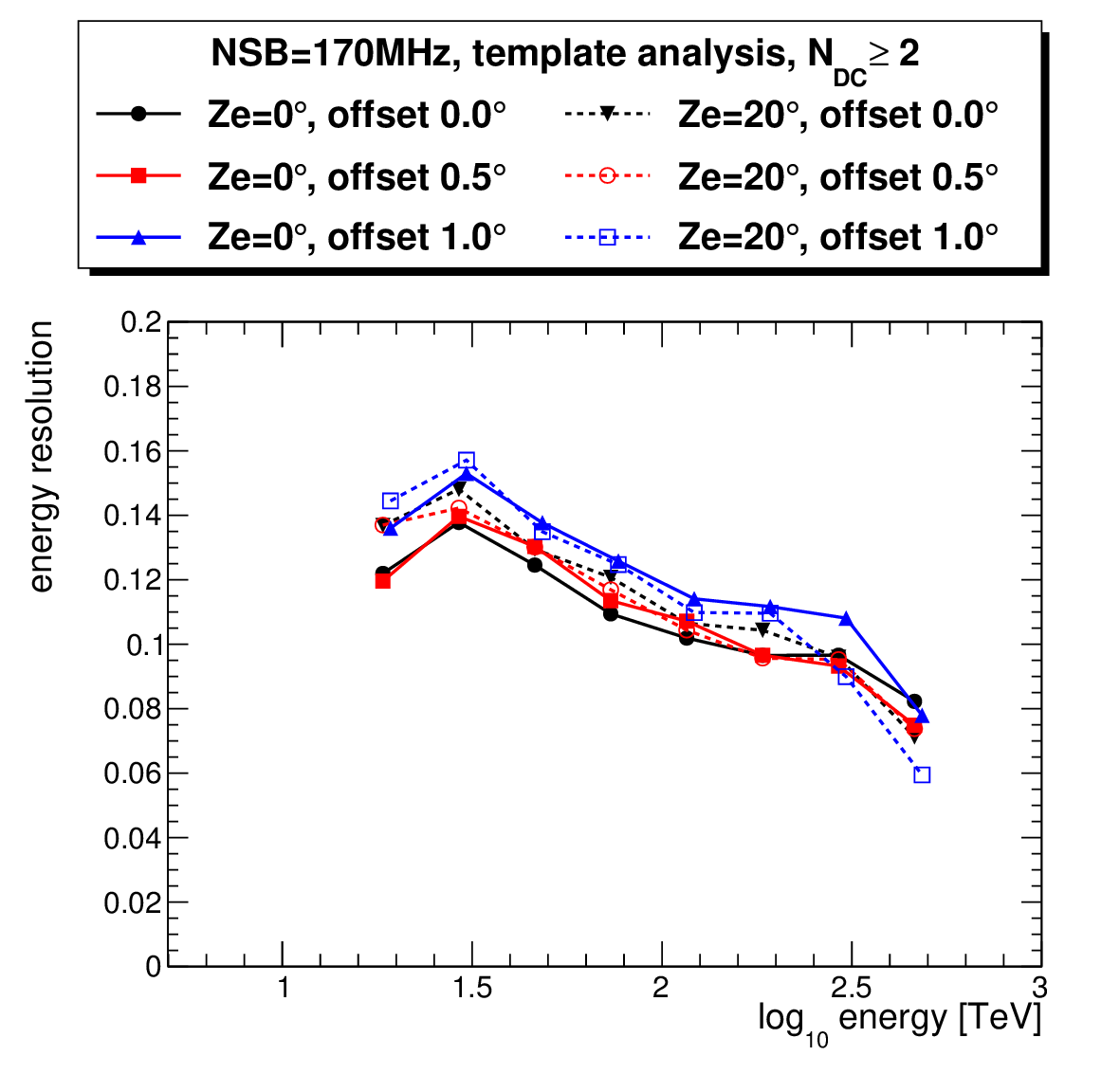 Figure 5: The energy spectrum of cosmic-ray iron nuclei as measured by the VERITAS experiment compared to previous measurements by VERITAS [25], H.E.S.S. [24], and the balloon-borne detectors TRACER [21,22] and CREAM [20]. Only statistical uncertainties are shown. (a) Differential flux. (b) Differential flux multiplied by E2.5 to improve the visual clarity.