Constraints on Very High Energy Emission from GRB 130427A

Gamma-ray bursts (GRBs) are the most luminous events in the Universe. Thought to be the product of massive stellar collapse or of mergers of compact objects (black holes, neutron stars), GRBs are relatively short-lived phenomena that produce radiation across the electromagnetic spectrum including high-energy gamma radiation above 100 GeV. Under favorable observing circumstances, VERITAS is expected to be sensitive enough to detect some GRBs.

GRB 130427A was a very fluent and nearby (z=0.34) burst that was detected by several orbiting telescopes and by ground-based, wide-field-of-view optical transient monitors. Apart from the intensity and proximity of this GRB, it is exceptional due to the extremely long-lived high-energy (100 MeV to 100 GeV) gamma-ray emission, which was detected by the Large Area Telescope on the Fermi Gamma-ray Space Telescope for ~70 ks after the initial burst.

VERITAS began follow-up observations of GRB 130427A ~71 ks (~20 hr) after the onset of the burst. The GRB was not detected with VERITAS; however, the high elevation of the observations, coupled with the low redshift of the GRB, make VERITAS a very sensitive probe of the emission from GRB 130427A for E > 100 GeV. The non-detection and consequent upper limit derived place
constraints on the synchrotron self-Compton model of high-energy gamma-ray emission from this burst.

Figure 1:  The upper panel shows predicted light curves for several fluent, LAT-detected GRBs: GRB090510 (De Pasquale et al. 2010), GRB090902B (Abdo et al. 2009), GRB090926A (Ackermann et al. 2011), and GRB130427A (Ackermann et al. 2014), as they would be seen by VERITAS at energies greater than 100 GeV assuming an elevation of 70 degrees. Each bin in the upper panel is derived from a gure similar to that in the lower panel, which is a detail of the photon flux extrapolated from LAT data of GRB130427A (including EBL absorption) over the period of the first VERITAS observation (see Table 1). The red dashed-dotted line is 5% of the average Crab Nebula spectrum for reference. VERITAS is capable of detecting a 5% Crab Nebula source over the duration of the first GRB130427A observation (1 hour). The lack of a detection by VERITAS suggests the presence of a spectral and/or temporal cuto ff at high energies and late times,
respectively. 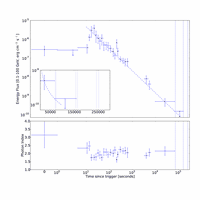 Figure 2: Upper panel shows the 0.1 - 100 GeV light curve for GRB130427A as measured by the LAT. The dashed line is a power-law t to the light curve. The lower panel shows the LAT-measured photon index. These data have been shown previously in Ackermann et al. (2014). The vertical dotted lines indicate the times of the three VERITAS observations given in Table 1. The inset details these observations.

Figure 3: Joint VERITAS-LAT spectral energy distribution. The VERITAS upper limits are calculated assuming an SSC model (Sari & Esin 2001) with an electron spectrum dN/dE ≈ E-2.45 and breaks at 100, 140, and 180 GeV (solid, dot-dashed, and dashed lines). The electron energy distribution is determined from the LAT-measured spectrum, as described in the text. This SED is then absorbed using the EBL model of Gilmore et al. (2009). The LAT data are best fi tted with a power law with an index of 2. 2 ± 0.2. The gray shaded region (the "bowtie") shows the one sigma range of power-law models compatible with the LAT data after extrapolating from the last LAT time bin (10 ks to 70 ks) into the VERITAS observing time (71 ks to 75 ks) using the photon flux relation dN/dt ≈ t1.35 ±0.08, which was obtained from fi tting the late-time LAT data (Ackermann et al. 2014). The electron spectral index of the SSC models is determined from the error-weighted mean of the late-time spectral and temporal indices measured by the LAT.