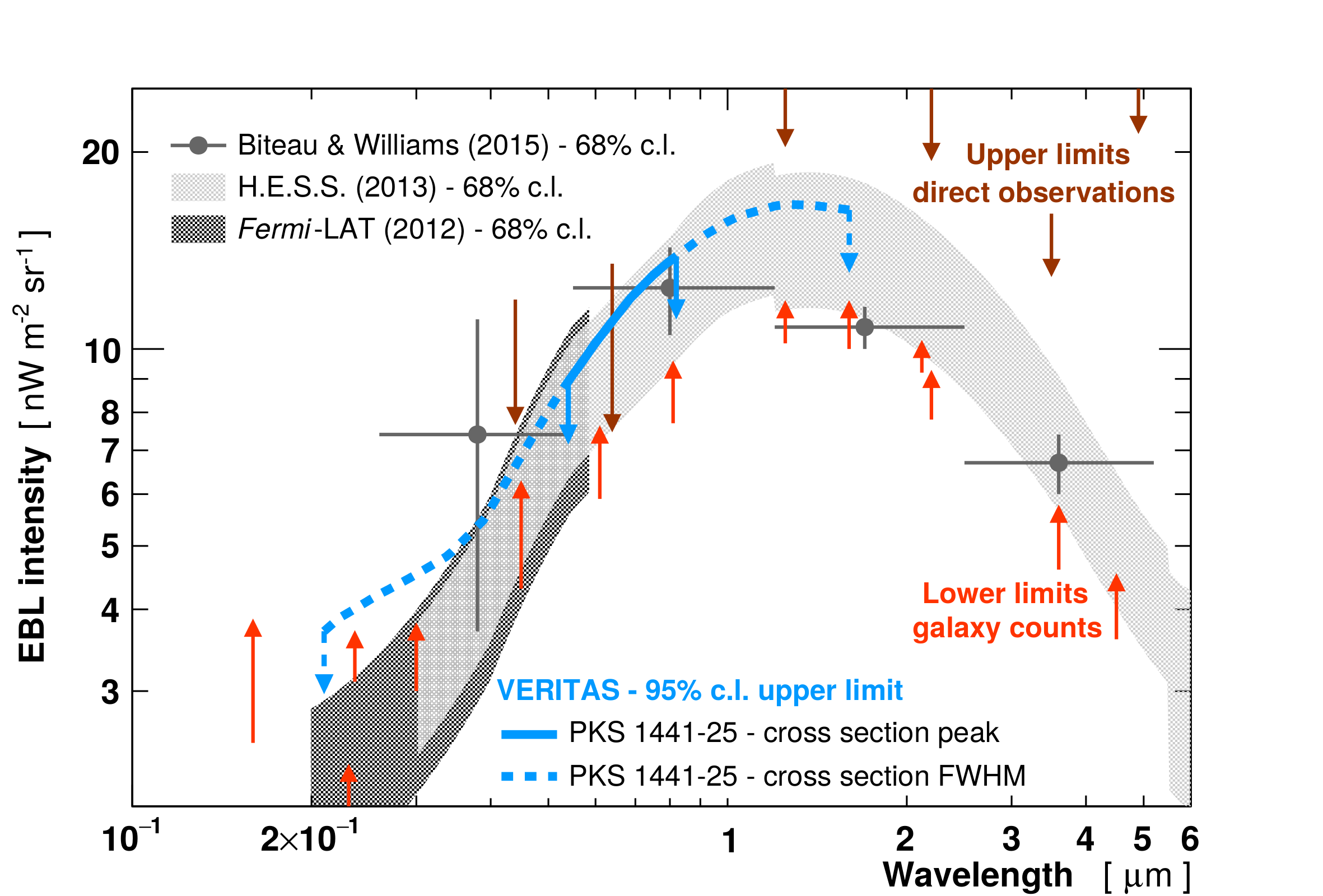 Near-ultraviolet to near-infrared spectrum of the EBL, with the upper limit from this work ishown in blue. For details, see Figure 3 below.

Blazars are tremendous light beacons powered by super-massive black holes. They are intrinsically unsteady sources and can sometimes flare up to ten or a hundred times their baseline flux.

PKS 1441+25 is one of these blazars that flared in late April 2015. With VERITAS, we detected gamma rays from this unusual object at the highest energies observed on Earth. The source is unusual for two reasons: firstly, it belongs to a subclass of blazars which encompasses only four of its siblings, to compare with a total of about 60 blazars known by ground-based gamma-ray observatories so far. It's also located much farther than the bulk of these objects. Imagine that it took more than 7.5 billion years for the gamma-rays to reach us, which is more than half the age of the universe!

Such very-high-energy gamma rays were unexpected. They have to escape from a net of lower energy photons, with which they can annihilate into matter-antimatter pairs. A tight net surrounds the vicinity of the black hole. A looser one, called the extragalactic background light, is cast throughout the voids of the universe which are filled with light from the first and younger stars.

Before this discovery, some of our colleagues were able to constrain the amount of light contained in the universe by using gamma rays from multiple blazars, with a precision of about 20%  (the Fermi-LAT and H.E.S.S. collaborations in 2012 and 2013, A. Dominguez and UCSC colleagues in 2013, J. Biteau and D. Williams in 2015). But with PKS 1441+25, we can now place tight constraints on this loose net of photons with a single blazar! This is clearly the opening of a new era where we can compare source-by-source measurements and start to probe the cosmic evolution of the extragalactic background light.

One might wonder how the tight net surrounding the black hole affects our constraints. This question was actually raised in 2007, by A. Reimer and colleagues, and we thought that using a blazar such as PKS 1441+25, which has a rich environment, would be a challenge. We have now realized, with observations across the entire electromagnetic spectrum, that the location of the gamma-ray emission for this source has to be beyond the tight net of photons, about a tenth of a light year away from the black hole - otherwise none of the gamma rays would have escaped. If its siblings behave in the same way, it means that we could possibly now also use them to constrain the extragalactic background light.

The observations of gamma-rays from PKS 1441+25 with VERITAS, but also with MAGIC and Fermi-LAT, constitute a fantastic step forward in our understanding of blazars as cosmic accelerators and as light beacons for gamma-ray cosmology.

Figure 3: Near-ultraviolet to near-infrared spectrum of the EBL. The upper limit from this work is shown in blue, in regions corresponding to the peak and FWHM of the cross section (1 < r < 2).