Multiwavelength observations of Mrk 501 in 2008

Mrk 501 is a well-studied nearby (redshift z = 0.034) BL Lac that was first detected at TeV energies by the Whipple Collaboration in 1996. Here, we present a multiwavelength campaign on Mrk 501 between March and May 2008. The multi-instrument effort includes the imaging atmospheric Cherenkov telescope (IACT) systems VERITAS and MAGIC sensitive to very high energy (VHE, E > 0.1 TeV) gamma-rays, the X-ray observatories Swift and RXTE, the optical telescopes with GASP-WEBT, and the radio instrument RATAN-600. Mrk 501 was found to be in a low flux state during the campaign, with a VHE flux in the range of 10% - 20% of the Crab nebula flux. Nevertheless, significant flux variations were detected with various instruments. We report for the first time a tentative X-ray to VHE correlation during such a low VHE activity in Mrk 501. The broadband spectral energy distribution during the two different emission states of the campaign can be adequately described within the homogeneous one-zone synchrotron self-Compton model, with the (slightly) higher state described by an increase in the electron number density. 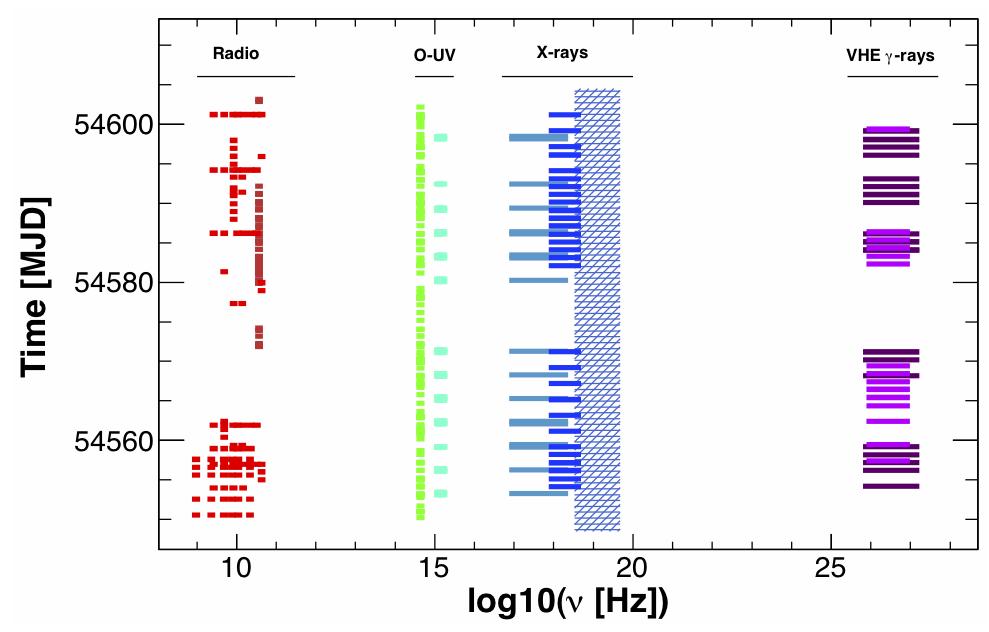 Figure 1:  Time and energy coverage during the multifrequency campaign. For the sake of clarity, the shortest observing time displayed in the plot was set to half a day, and different colors were used to display different energy ranges. The correspondence between energy ranges and instruments is provided in Table 1. 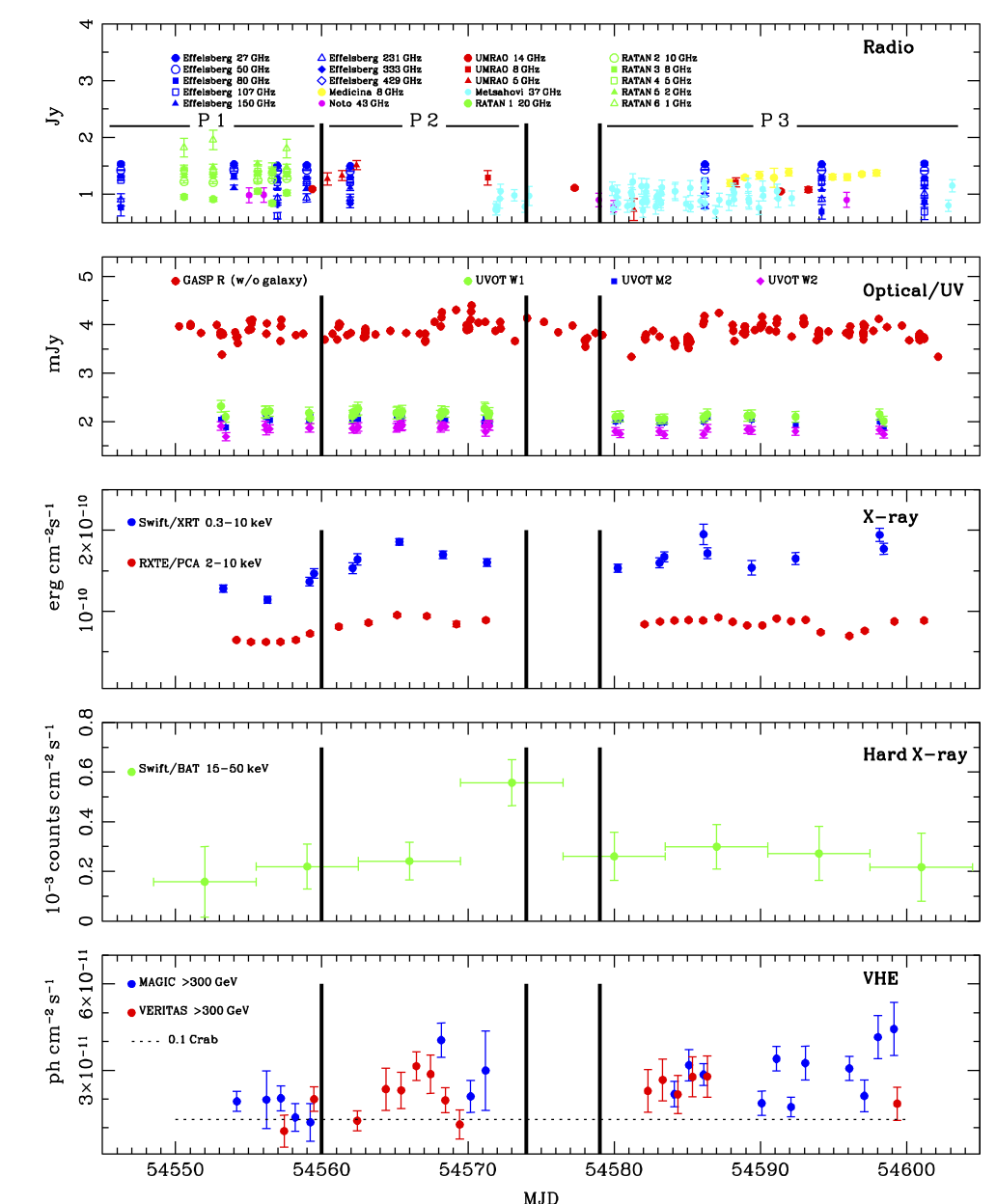 Figure 2: Multifrequency light curve for Mrk 501 during the entire campaign period. The panels from top to bottom show the radio, optical and UV, X-ray, hard X-ray, and VHE Υ-ray bands. The thick black vertical lines in all the panels delimit the time intervals corresponding to the three different epochs (P1, P2, and P3) used for the SED model fits in Sect. 6. The horizontal dashed line in the bottom panel depicts 10% of the flux of the Crab nebula above 300 GeV (Albert et al., 2008b). 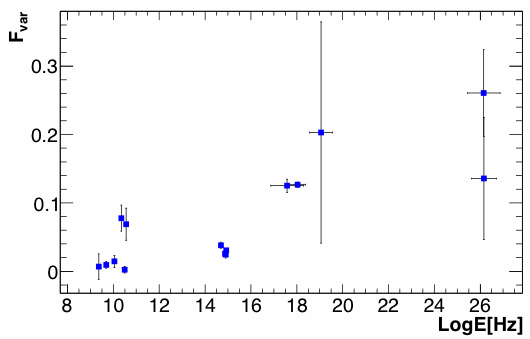 Figure 3: Fractional variability parameter Fvar vs energy covered by the various instruments. Fvar was derived using the individual single-night flux measurements except for Swift/BAT, for which, because of the limited sensitivity, we used data integrated over one week. Vertical bars denote 1σ uncertainties, horizontal bars indicate the approximate energy range covered by the instruments. 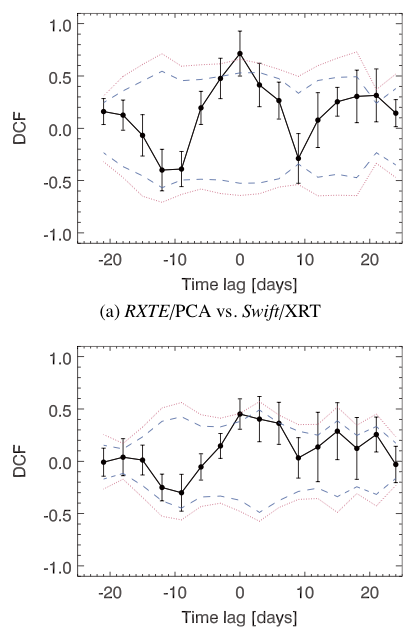 Figure 4: Discrete correlation function for time lags from -21 to +21 days in steps of 3 days. The (black) data points and errors are the DCF values computed according to the prescription given by Edelson & Krolik (1988). The (blue) dashed and the (red) dotted curves depict the 95% and 99% confidence intervals for random correlations resulting from the dedicated Monte Carlo analysis described in Sect. 5.

Figure 5: Spectral energy distributions for Mrk 501 in the three periods described in Sect. 3. The legend reports the correspondence between the instruments and the measured fluxes. Further details about the instruments are given in Sect. 2. The vertical error bars in the data points denote the 1σ statistical uncertainty. The black curve depicts the one-zone SSC model fit described in Sect. 6, with the resulting parameters reported in Table 2.