VERITAS searched for very high energy gamma-ray emission from six blazars based on characteristics in the high energy gamma-ray band as observed by the Fermi Large Area Telescope.  These blazars are RGB J0136+361, RGB J0316+090, RGB J0909+231, RGB J1058+564, RGB J1243+364 and RX J1436.9+5639. The gamma-ray emission observed for these sources by Fermi was extrapolated to the VERITAS band while accounting for photon absorption by the lower energy photons emitted by stars. These UV photons are known as the extragalactic background light. Despite expectations, no very high energy gamma rays were detected by VERITAS.

The VERITAS observations are presented with the Fermi and Swift UV and X-ray data in order to investigate why no very high energy emission is present. This multiband emission is described with a model which attributes the emission to a blob of relativistic electrons and positrons in the presence of a magnetic field.  This modeling allows sub-type classification of the blazars for the first time.  Four of the six blazars show emission scenarios which are not well supported by sustainable energy arguments.  More specifically, the model used to describe the emission from these four blazars showed more energy in the electrons and positrons than in the magnetic field, a challenging scenario considering that the magnetic field is often interpreted as the source for the particle energy within blazar jets. 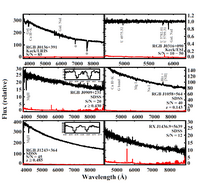 Figure 1:  Optical spectra for the six BL Lacs selected from the 1FGL catalog and observed with VERITAS. The black shows the object spectrum, while the red shows the instrumental noise. Only one BL Lac had a confirmed redshift upon selection (RGBJ1058+564, z=0.143), confirmed with the SDSS spectrum shown in the middle-right panel. Redshift lower limits for RGBJ0909+231 (z≥0.4305; middle left) and RGBJ1243+364 (z≥0.485; lower left) are found from Mg II absorption lines in the SDSS spectra. A featureless SDSS spectrum is found for RXJ1436.9+5639. A redshift measurement attempt for RGBJ0136+391 using the Keck LRIS instrument shows a featureless power-law spectrum (upper left). The normalized ESI spectrum of RGBJ0316+090 exhibits three unidentified absorption features (upper right). The spectral analysis of the Keck LRIS and ESI spectra are detailed in Kaplan et al. (2012).

Figure 2: Fermi -LAT light curves, with units of 10−9 ph cm−2s−1, are shown for the six candidate VHE-emitting BL Lacs for 29 months of LAT data (MJD 54682-55565; 2008 August 4-2011 January 4). The beginning and end of the VERITAS observations are denoted by vertical grey lines in each panel. The short VERITAS observation periods for RGBJ0136+364 and RGBJ0316+090 can be seen, representing only 7 days each. Upper limits at 95% confidence level are shown for bins resulting in TS of less than 9, denoted by downward pointing black triangles. Only RGBJ0316+090 and RGBJ1058+564 show any significant variability. For these two sources, LAT data only for the time periods within the window of VERITAS
observations are used to constrain the modeling.

Figure 3: Non-contemporaneous broadband SED data for each BL Lac shown with corresponding SSC modeling using the model of B¨ottcher & Chiang (2002). The modeling results, corrected for the EBL absorption, are shown with grey lines. The archival radio data points are taken from NED and used only as upper limits, accounting for the fact that much of the radio emission may result from diffuse synchrotron emission in the radio lobes of the jet. See the text for a more detailed description of the model parameters, with values listed in Table 5.