VERITAS Observations of the Nova in V407 Cygni

Confidence region maps for the hadronic model of gamma-ray production in V407 Cyg constrained by Fermi-LAT data  plus the VERITAS upper limit. See Figure 4, below, for more details.

In March 2010, the Fermi-LAT Collaboration announced a new GeV transient in the galactic plane, FGL J2102+4542, that was identifed as a nova outburst in the symbiotic binary V407 Cygni.  A nova is the result of a runaway thermonuclear event initiated when material accreted onto a white dwarf from a companion star reaches the temperature and pressure required for nuclear burning and can result in a sudden increase in optical brightness of several magnitudes.  A nova outburst from V407 Cyg was detected in the optical waveband on 2010 March 10 with a magnitude of  6.9, while pre-outburst magnitudes from the previous two years of monitoring ranged between magnitude 9 and 12.  The V407 Cygni system consists of a Mira-type pulsating red giant and a white dwarf.

VERITAS observed V407 Cygni for several nights after the announcement of the Fermi-LAT detection, during days 9 - 16 of the outburst (2010 March 19 - 26). The zenith angle of these observations ranged between 50 and 66 degrees (VERITAS typically observes at zenith angle smaller than 40 degrees).  Analysis of the VERITAS data did not show a significant detection at the location of V407 Cygni.  This paper presents the VHE upper limits calculated based on the VERITAS observations, an overview of a new reconstruction method that is optimized for large zenith angle observations, and the implications of the VHE upper limits for the models of the outburst. 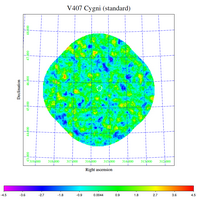 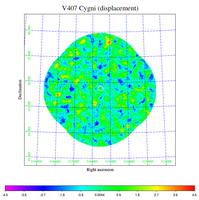 Figure 1:  VERITAS significance maps of V407 Cyg reconstructed by the two methods. The white circle at the center indicates the location of the Fermi-LAT detection and the size of the source region used for the VERITAS analysis. 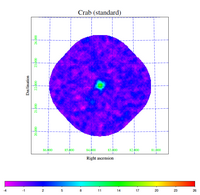 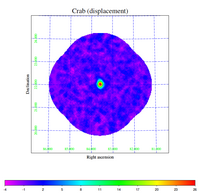 Figure 2: VERITAS significance maps of the Crab Nebula reconstructed by the two methods. 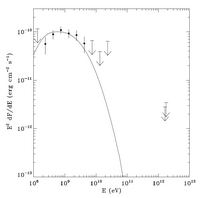 Figure 4: Confidence region maps for the hadronic model of gamma-ray production in V407 Cyg constrained by Fermi-LAT data alone (a, left) and constrained by the Fermi-LAT data plus the VERITAS upper limit (b, right). The x-axis gives the spectral slope (sp) and the y-axis is the logarithm of the cutoff energy (Ecp in GeV). The numerical values correspond to the confidence level of the fit with the given values of the parameters. The 99% contour from Fermi-LAT data alone is shown as a dashed line in (b) for comparison.