VERITAS Observations of Day-scale Flaring of M87 in April 2010 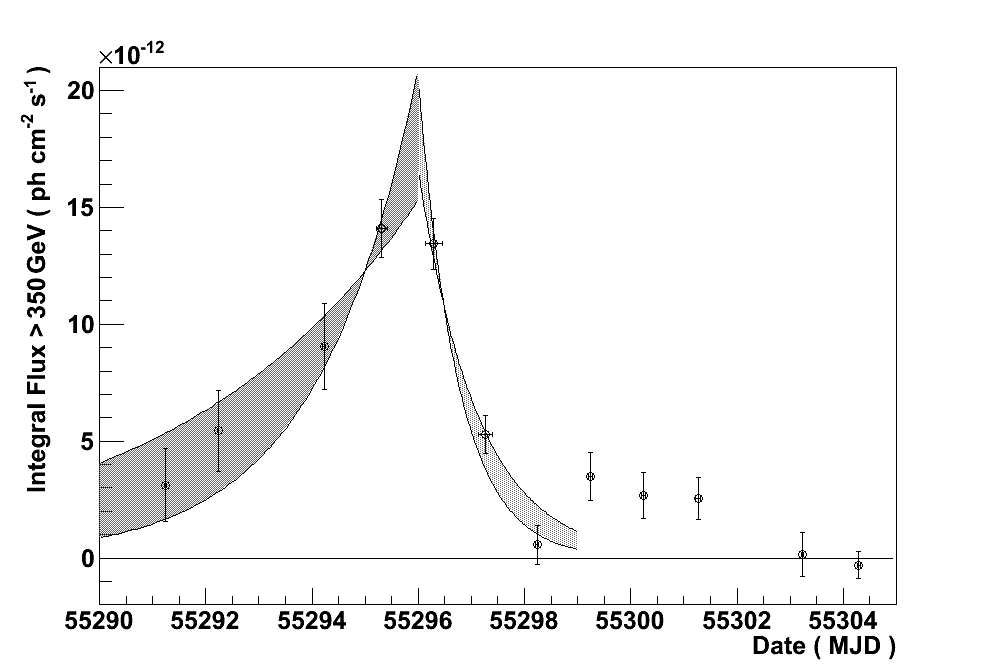 Fits to the April 2010 VHE gamma-ray light curve of M87 leading up to the flare and trailing the flare. See Figure 3 below for more details..

M87 is a nearby radio galaxy with its jet misaligned with the line of sight. The proximity of M87 and the jet misalignment allow detailed studies of spatially resolved emission regions in the radio, optical, and X-ray wavebands.  The jet is unresolved in the gamma-ray regime, but contemporaneous flux variability measurements with other wavelengths provide a unique opportunity to constrain the emission origin and mechanisms responsible for high energy gamma-ray emission from an active galactic nucleus (see 2010 joint paper).  VERITAS has been monitoring the very-high-energy (VHE, >100 GeV) gamma-ray activity of the radio galaxy M87 since 2007.  Between 2007 and 2010, over 170 hours of M87 observations have been performed by the VERITAS array.  During 2008, flaring activity on a timescale of a few days was observed with a peak flux of (0.70±0.16)×10-11 cm-2s-1 at energies above 350 GeV, approximately 10 times the average non-flaring flux of M87.  In April 2010, VERITAS detected a flare from M87 with peak flux of (2.71±0.68)×10-11 cm-2s-1 for E>350 GeV.  The source was observed for six consecutive nights during the flare, resulting in a total of 21 hours of good quality data.  The most rapid flux variation occurred on the trailing edge of the flare with an exponential flux decay time of 0.90+0.22-0.15 days.  The shortest detected exponential rise time is three times as long, at 2.87+1.65-0.99 days. The quality of the data sample is such that spectral analysis can be performed for three periods: rising flux, peak flux, and falling flux.  The spectra obtained are consistent with power-law forms.  The spectral index at the peak of the flare is equal to 2.19±0.07. There is some indication that the spectrum is softer in the falling phase of the flare than the peak phase, with a confidence level corresponding to 3.6 standard deviations.  The spectra and timescales derived from this dataset favor the predictions by leponic models over those of hadronic or large scale models.  In this paper, we discuss the implications of these results for the acceleration and cooling rates of VHE electrons in M87 and the constraints they provide on the physical size of the emitting region.

Figure 1: Daily light curve of M87 observed by VERITAS in 2010.  Clear evidence of flaring activity is seen in April 2010 (MJD 55291 - 55298).  Trigger alerts sent by MAGIC on February 10th (MJD 55237) and by VERITAS and MAGIC on April 9th (MJD 55295) are indicated by vertical lines.  The average nightly flux during the peak of the flare exceeds 10% of the Crab Nebula flux at the same energy threshold of 350 GeV.  A constant spectral index of 2.5 was assumed for the daily flux calculation. 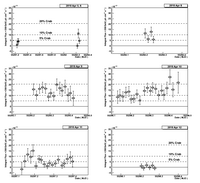 Figure 5: Spectral index vs. flux normalization constant using spectra from the  three periods (rising, peak, and falling) and archival spectra from 2004 onwards.  The dashed line represents a constant fit with a χ2 probability of 0.26, and the dashed-dotted line represents a linear fit of the form Γ = p0 + p1 log10φ0 with a  χ2 probability of 0.52.  The values of p0 and p1 are given in the text.