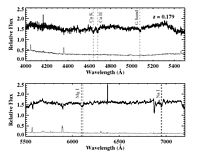 The recent detection of very-high-energy (VHE, E> 100 GeV) photons from a previously unidentified source - RX J0648.7+1516 has allowed the association of the target with an X-ray source found in a survey more than a decade ago. Immediately following the discovery of this VHE emission, observatories across nearly all wavelengths temporarily turned their attention to this source.

The multiwavelength data that was collected included optical spectroscopy with the Lick Observatory in California, allowing a first-time-ever optical identification of this unidentified X-ray source as a BL Lac type active galactic nucleus.  This particular type of galaxy is theorized to have a powerful jet emerging from a supermassive black hole at the center of the galaxy that is pointed directly along the Earth line of sight.  These galaxies are the most common type of galaxy to be detected by very high energy observatories such as VERITAS.  The optical spectroscopy provided by the Lick Observatory also allowed the determination of the relative distance to the blazar, a very important piece of information in understanding the nature of these extreme galaxies.

Other multiwavelength data collected included observations from two space-based NASA observatories: the Swift space-based telescope with both X-ray and the UV instruments onboard, and the Fermi Large Area Telescope, a high-energy gamma-ray mission.  The organized collection of these data is a good illustration of the astronomical community's efforts to work together in exploring the mysteries of the Universe, allowing a more foundational view of interesting targets like the galaxy RX J0648.7+1516.  With this complete multiwavelength view of the galaxy, VERITAS has the ability to derive information about how the galaxy RX J0648.7+1516 is producing the very high energy photons that were discovered.

Figure 1: Top: The differential photon spectrum of RXJ0648.7+1516 between 200 and 650 GeV measured by VERITAS between 4 March and 15 April 2010 (MJD 55259–55301). The solid line shows a power-law fit to the measured flux derived with four equally log-spaced bins and a final bin boundary at 650 GeV, above which there are few on-source photons. A 99% confidence upper limit evaluated between 650 GeV and 5 TeV assuming a photon index of 4.4 is also shown. The shaded region shows the systematic uncertainty of the fit, which is dominated by 20% uncertainty on the energy scale. Bottom: The differential photon spectrum of RXJ0648.7+1516 as measured by Fermi -LAT over 2.3 years (MJD 54683–55517, grey circles) with the highest energy bin containing a 95% confidence upper limit and upperlimits from the VERITAS observation period (MJD 55259–55301, grey triangles).

Figure 2: Spectrum of RXJ0648.7+1516 showing the Ca H+K, G-band, Na I and Mg I spectral features indicating a redshift of z = 0.179. Since the G-band arises in stellar atmospheres, we interpret this as the redshift for the host galaxy and not an intervening absorber. The blazar was observed at Lick Observatory using the 3−m Shane Telescope on 6 November 2010. 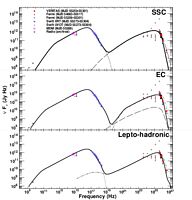