The VERITAS telescopes, located in southern Arizona, survey the sky looking for sources of very-high-energy gamma-ray emission in the teraelectronvolt scale (TeV, or 1012 electron volts - a trillion times more energetic than what our eyes can see). The night of February 8th 2014 VERITAS pointed towards B2 1215+30, the nucleus of a galaxy that has been extensively studied by radio, optical, X-ray and gamma-ray observatories for decades, to see that its gamma-ray flux was sixty times brighter than ever measured before.

How can a fairly normal galaxy suddenly become the brightest gamma-ray source in the sky? First of all, by not being just a normal galaxy. B2 1215+30 is what we call an active galaxy, meaning that its central black hole is actively swallowing the gas and plasma around it. This accretion of material produces two narrow beams of particles and radiation that, when pointing towards us, appear brighter than the light of all the stars in the galaxy put together.

Only a small fraction of active galaxies emit light at the extreme energies that VERITAS detects. In order for very-high-energy gamma rays to be produced, particles (mainly electrons) need to be accelerated to energies of several teraelectronvolts. These are the energies reached at the Large Hadron Collider, the most powerful particle accelerator on Earth. We think that the jets in active galaxies are capable of accelerating electrons up to those energies. There are two possibilities: electrons gain energy by getting trapped in shockwaves inside the jets--this is called diffusive shock acceleration--or when the magnetic field in the jet accumulates so much energy that it needs to rearrange its geometry. This later process is called magnetic reconnection, and is the same that produces solar flares in the surface of the Sun.

The emission we see from the jets of active galaxies is variable. In the same way a car exhaust vents more fumes when the engine revs up, the emission from these jets is seen to fluctuate up and down due to changes in the strength and efficiency of the particle accelerator. But the magnitude of the flare we measured from B2 1215+30 was more extreme than anything we had seen before. In the 45 minutes that VERITAS observed it on February 8th 2014, B2 1215+30 emitted as much energy as the Sun radiates in 400,000 years.

To add to the surprise, on the next night the gamma-ray flux from B2 1215+30 was back to normal values, like nothing had happened. This sudden flux drop carries information about the size of the region producing the gamma-ray emission. Even if the gamma-ray emission from B2 1215+30 could be turned off instantaneously like a switch, the light traveling from the far side of the emitting region would take a time t=R/c longer to arrive at Earth than light from the near side, with R being the size of the region emitting gamma rays and c the speed of light. An observer on Earth would see a progressive dimming of the emission, with smaller emitting regions resulting in faster flux changes. In the case of B2 1215+30, such a bright flare disappearing after just 24 hours implies that the region of the jet where the gamma-rays originated must be about the size of the Solar System, relatively small when compared to the size of the jet emerging from a black hole about hundred million times more massive than the Sun.

Similarly puzzling was the lack of increased emission in the X-ray and optical bands during the gamma-ray flare. Gamma rays are produced when very energetic electrons moving downstream of the jet kick a photon--a massless light particle--that flies out carrying all the energy of the electron. These electrons, however, also emit synchrotron radiation as they spiral in the jet's magnetic field, radiating photons with energies in the optical and X-ray bands. If more electrons were there to kick photons to gamma-ray energies, we would expect them to also generate brighter emission at lower energies. But optical telescopes operated by the Tuorla Observatory and all-sky X-ray satellite monitors Swift-BAT and MAXI did not see anything unusual from B2 1215+30 at the time of the record-high gamma-ray flux. One way to explain that gamma rays dominate the energy output of the flare is if most of the particle acceleration power goes into very energetic electrons--what we call a hard electron spectrum--that lose energy very fast by producing gamma rays, having no time to radiate X-ray and optical synchrotron radiation. These hard electron spectra do not come naturally from diffusive shock acceleration but are expected from magnetic reconnection.

We still need to observe more bright and fast flares from galactic nuclei like B2 1215+30 to establish that magnetic reconnection is the mechanism driving the particle accelerator in jets. That is, however, a very exciting possibility. If it works in jets several times the size of the Solar System and is also responsible for Solar eruptions of only a few thousand kilometers in size, magnetic reconnection may be a truly universal mechanism that can convert magnetic energy into particle energy in a wide range of astrophysical scenarios.

Figure 1:  TeV (top), GeV (middle), and optical (bottom) light curves of B2 1215+30 in 2013 (left panels) and 2014 (right panels). Fluxes are calculated in 1-day bins for VERITAS. Fermi-LAT fluxes are calculated with 3-day integration bins (blue plus signs) and 1-day bins (orange plus signs) around the time of the 2014 flare. Downward-pointing triangles indicate 95% c.l. upper limits derived from the Fermi-LAT data for time bins with signal smaller than 2σ. The yearly averaged TeV flux in 2011 (8.0 x 10-12 cm-2 s-1; Aliu et al. 2013) is shown by a red dashed line, and a blue dashed line indicates the average GeV flux from Acero et al. (2015). Statistical errors on the Tuorla optical fluxes are smaller than the data points. 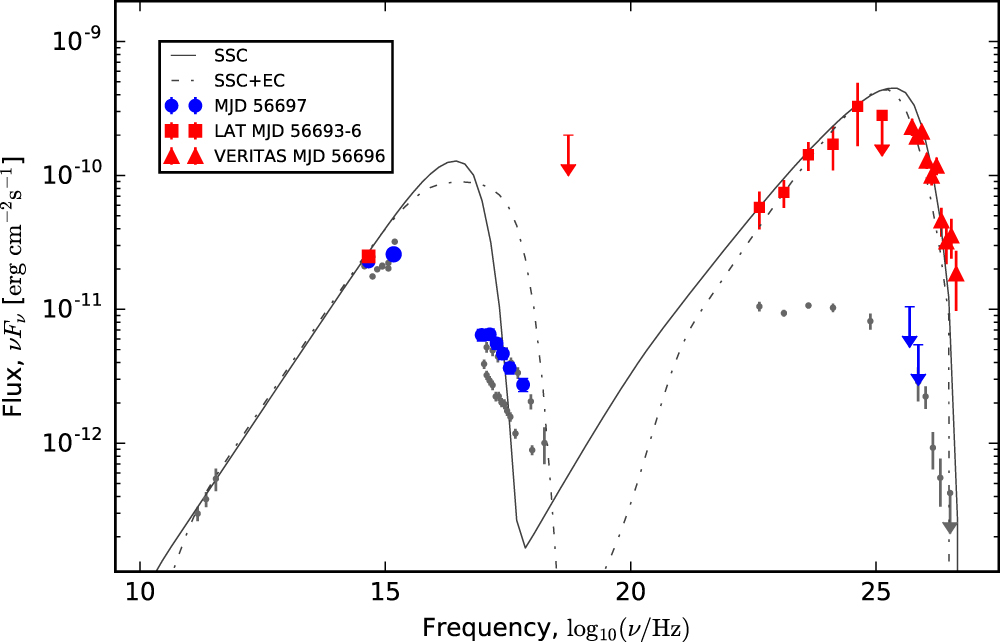 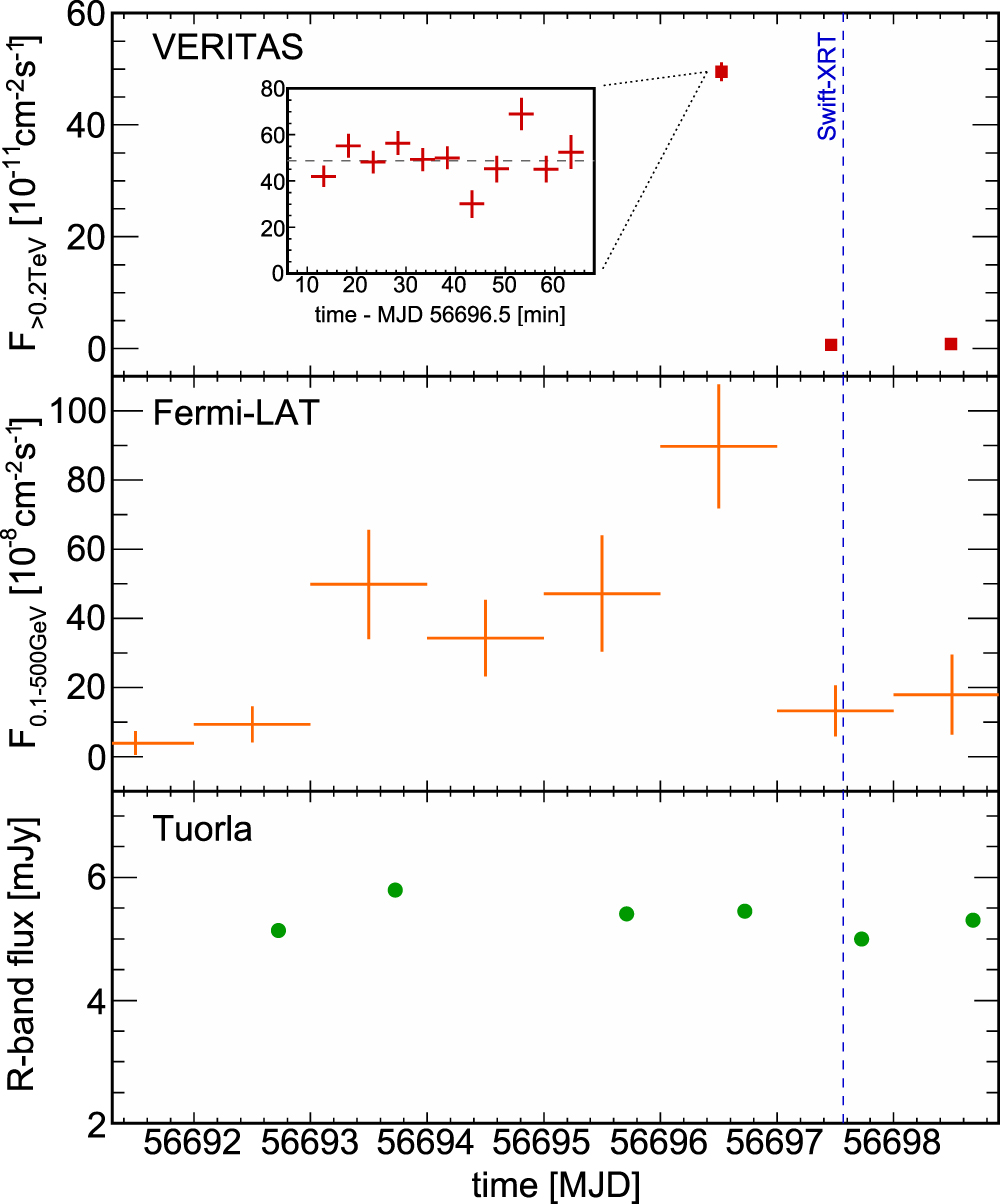