Orbit of the pulsar with location of the shock-nose (upper), and X-ray light curve (lower). See Figure 6 (below) for more details.

In this paper, we follow up on the puzzling gamma-ray binary HESS J0632+057 with combined observations by VERITAS, the X-ray observatories NuSTAR and Swift and the optical observatory MDM. The observations are interpreted in two different approaches. First, a two-population leptonic model is used to describe the orbit-folded X-ray light curve and secondly, a pulsar-wind model is fitted to the observed SED over 5 epochs. The results show a good agreement between model and observations and provide a number of quantitative insights about this fascinating system. 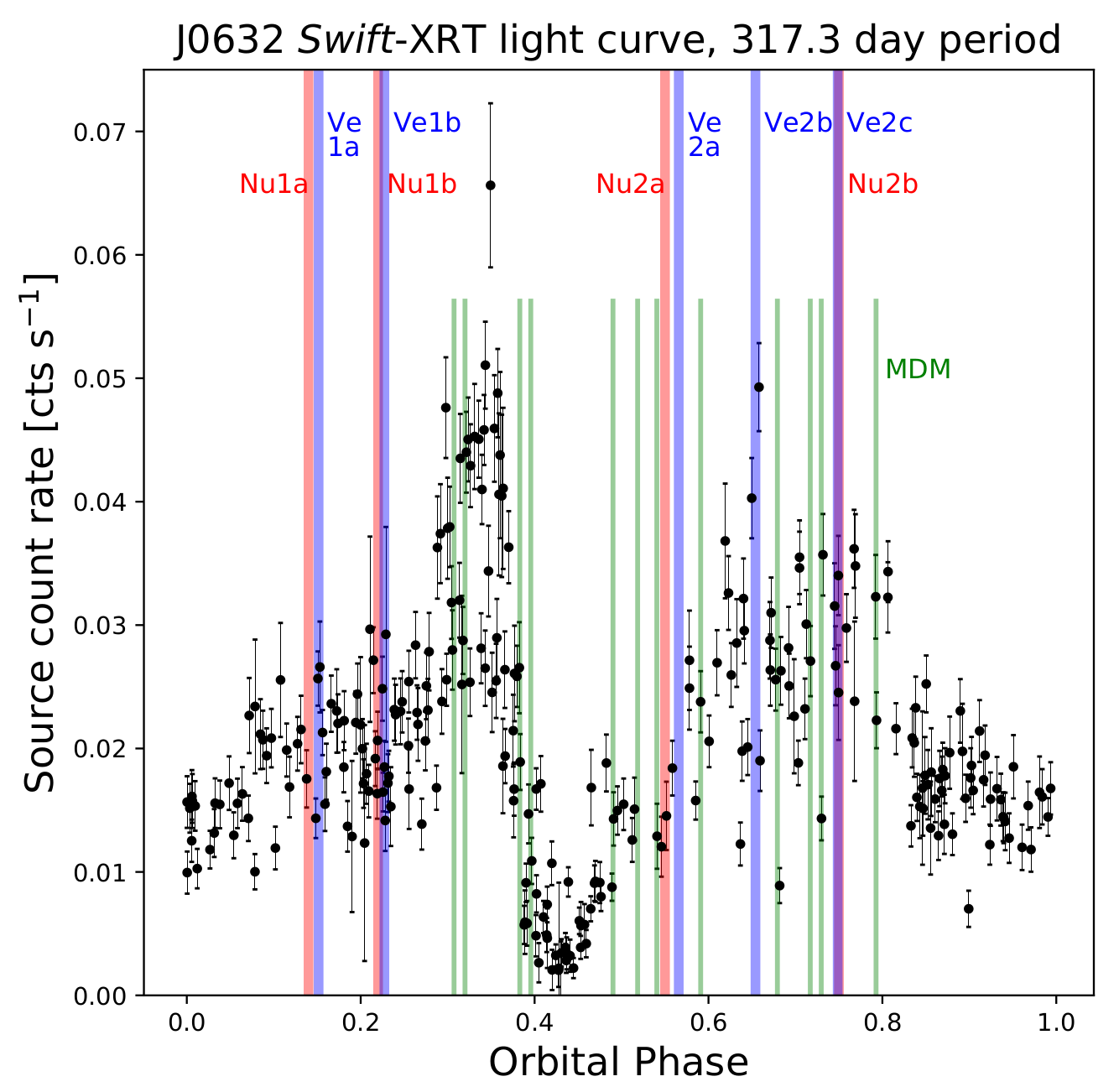 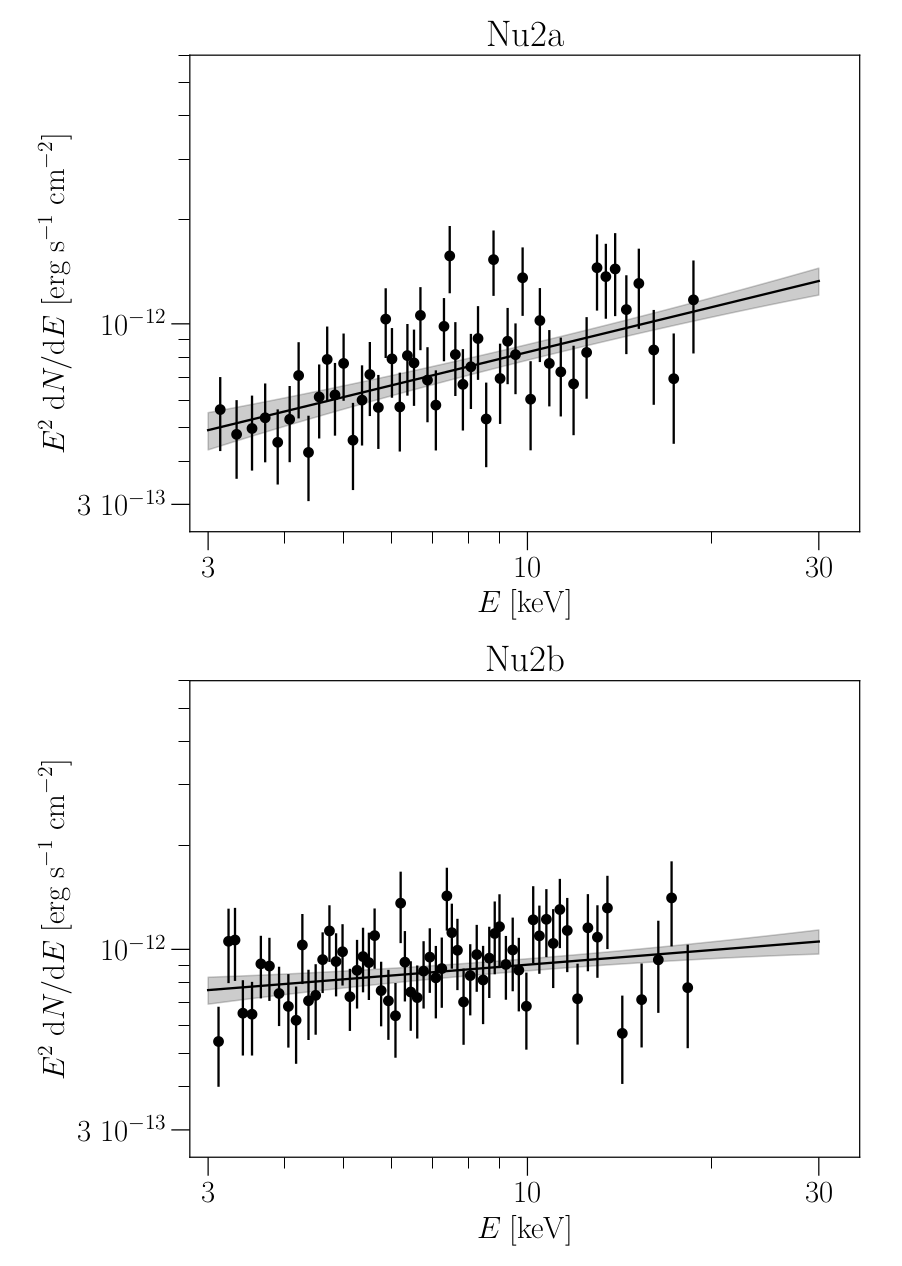 Figure 2: SED derived from NuSTAR observations. The solid lines show the result of the single power law fit and the gray band its 1σ confidence interval. Values of the integrated flux and spectral index can be found in Table 1. 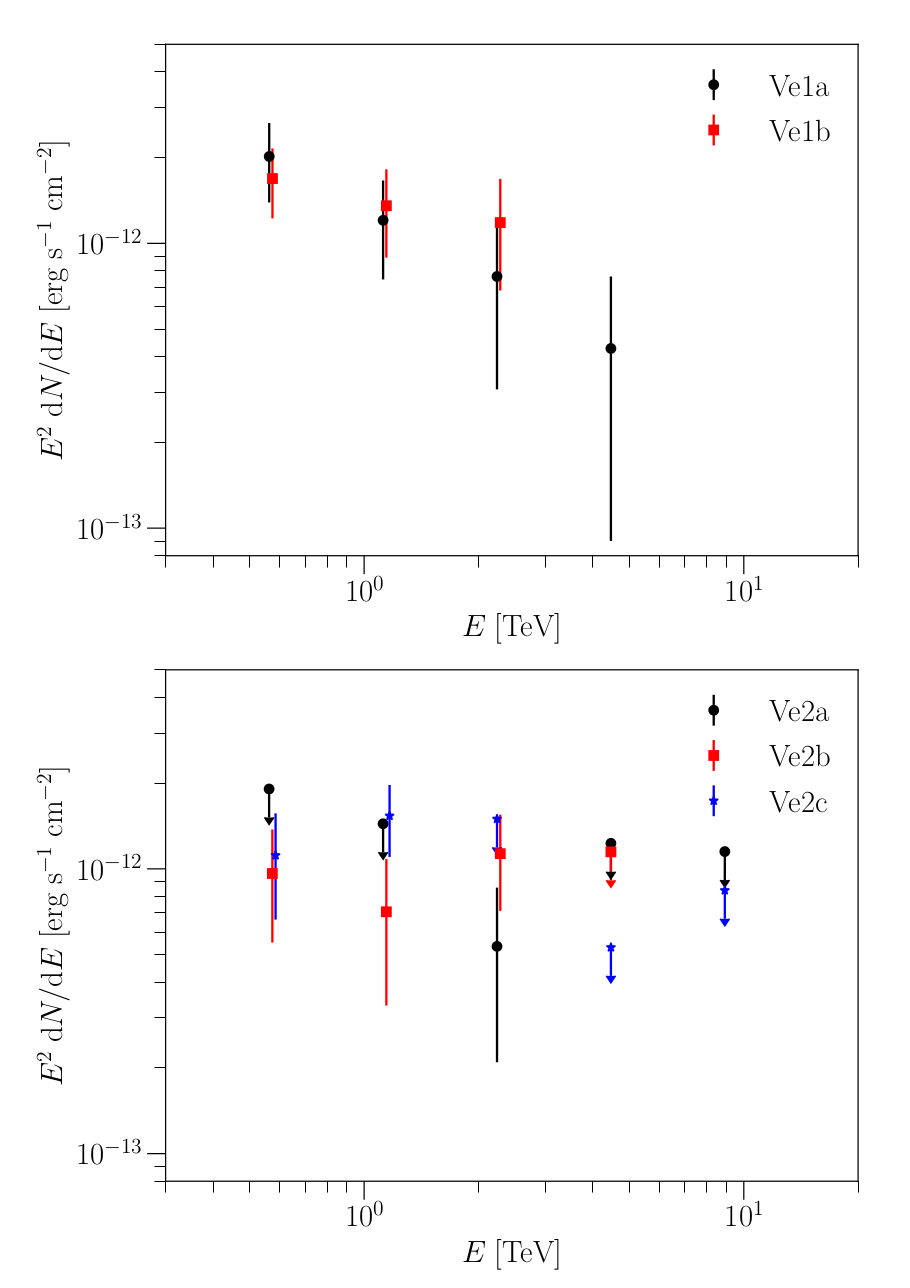 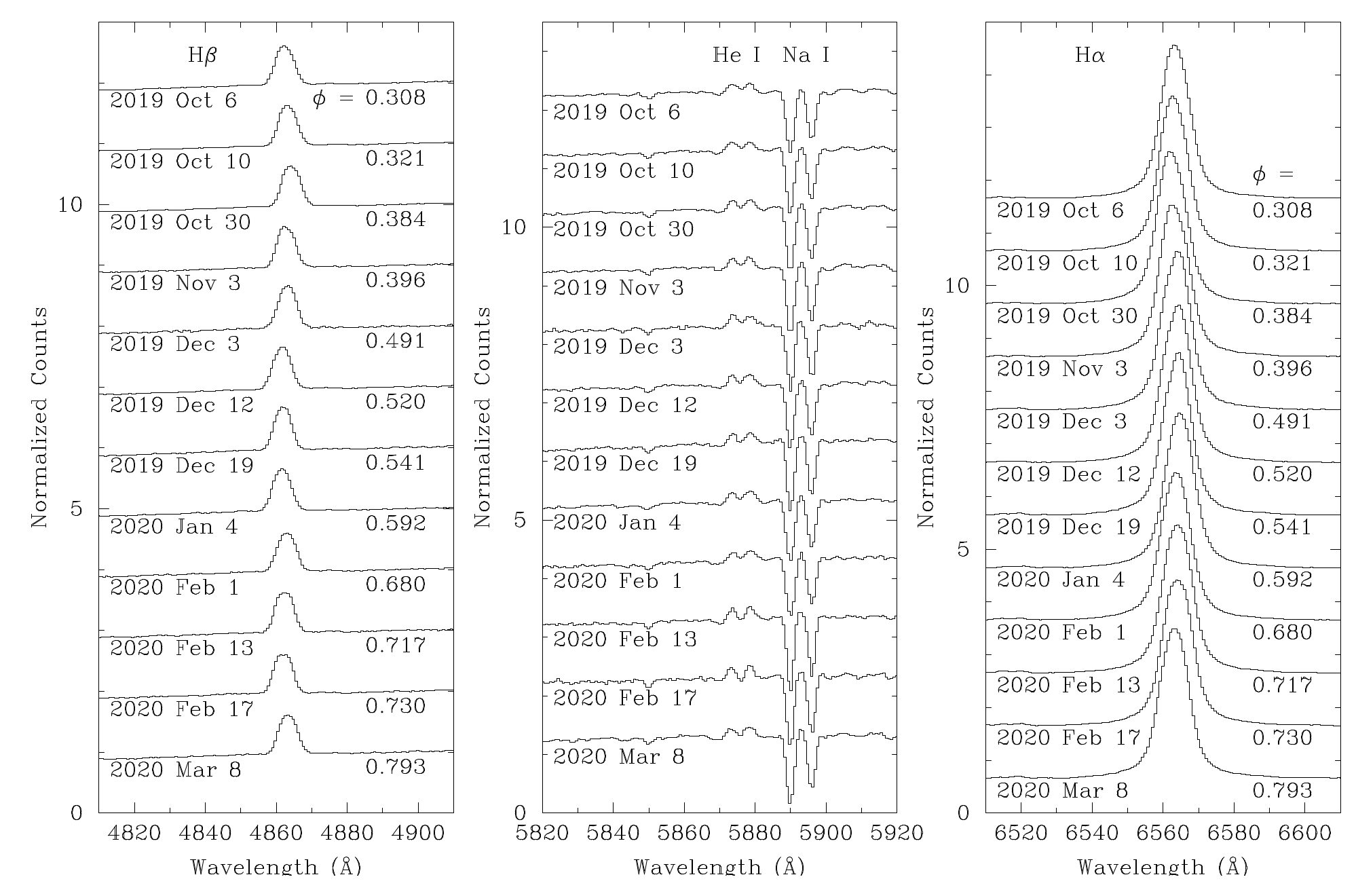 Figure 4: Selected regions of the summed optical spectra listed in Table 3. In each panel, the counts spectra are normalized to 1 and shifted by 1 for display purposes. Orbital phase φ is calculated using the ephemeris of Fig. 1. Interstellar Na I λλ5889; 5895 absorption was used as a wavelength reference. Double-peaked He I λ5876 emission has a peak separation of  ≈250 km s-1. 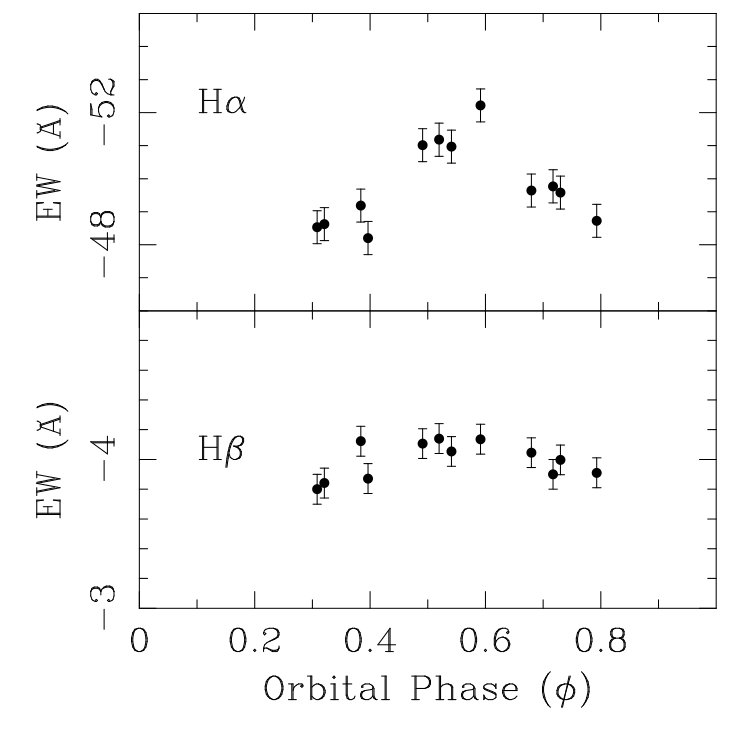 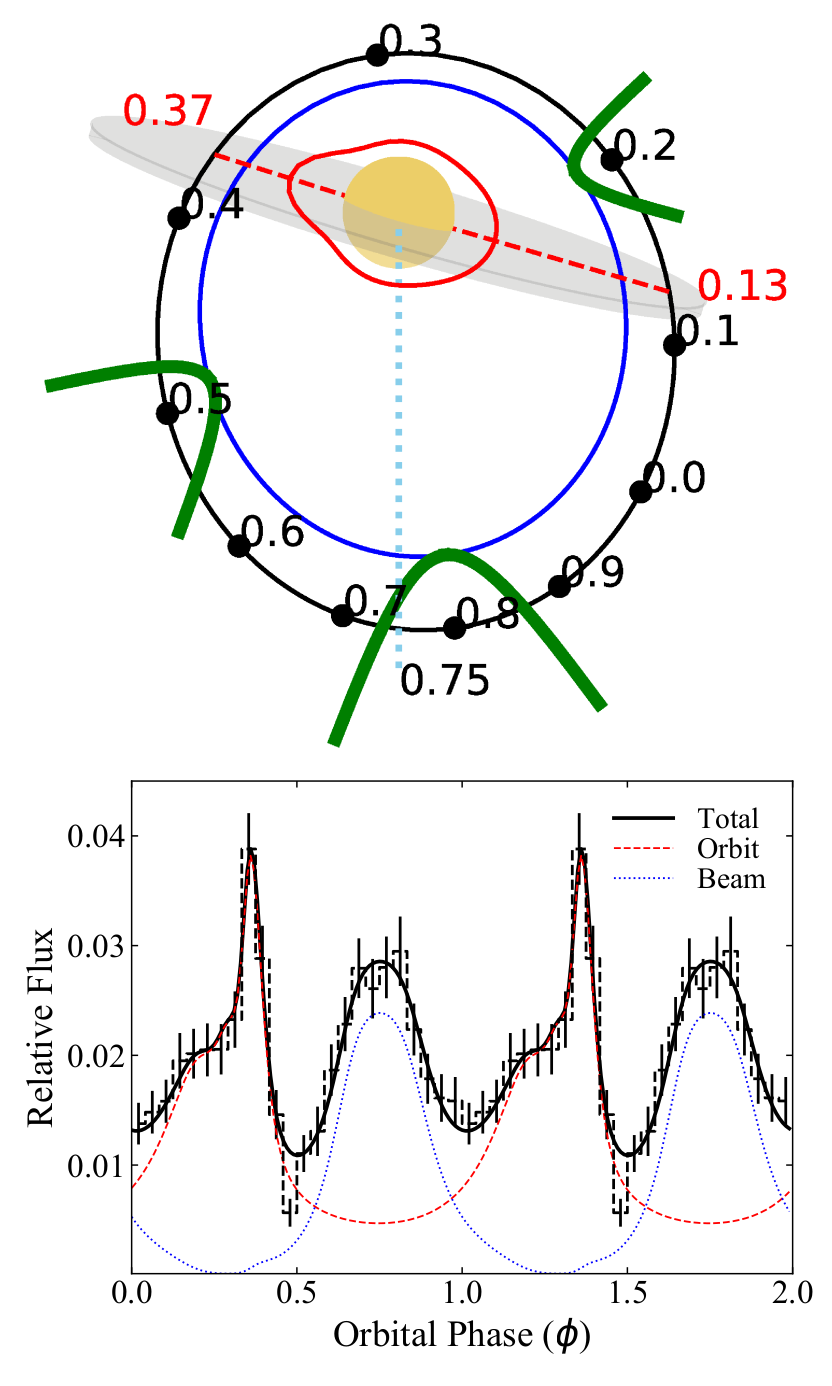 Figure 6: Top: Assumed orbit of the pulsar (black) and location of the shock nose (blue). The relative magnetic field strength at the nose as a function of phase is indicated in red by radial distance from the pulsar. The cyan dotted line shows the observer LoS, and the cross section of the inclined disk is indicated by the red dashed line. Green curves illustrate the cross sections of the IBS at a few phases for reference. Bottom: A binned X-ray light curve (data points) and light-curve model (black). Each model component (red: orbit+disk, blue: beaming) is also displayed. 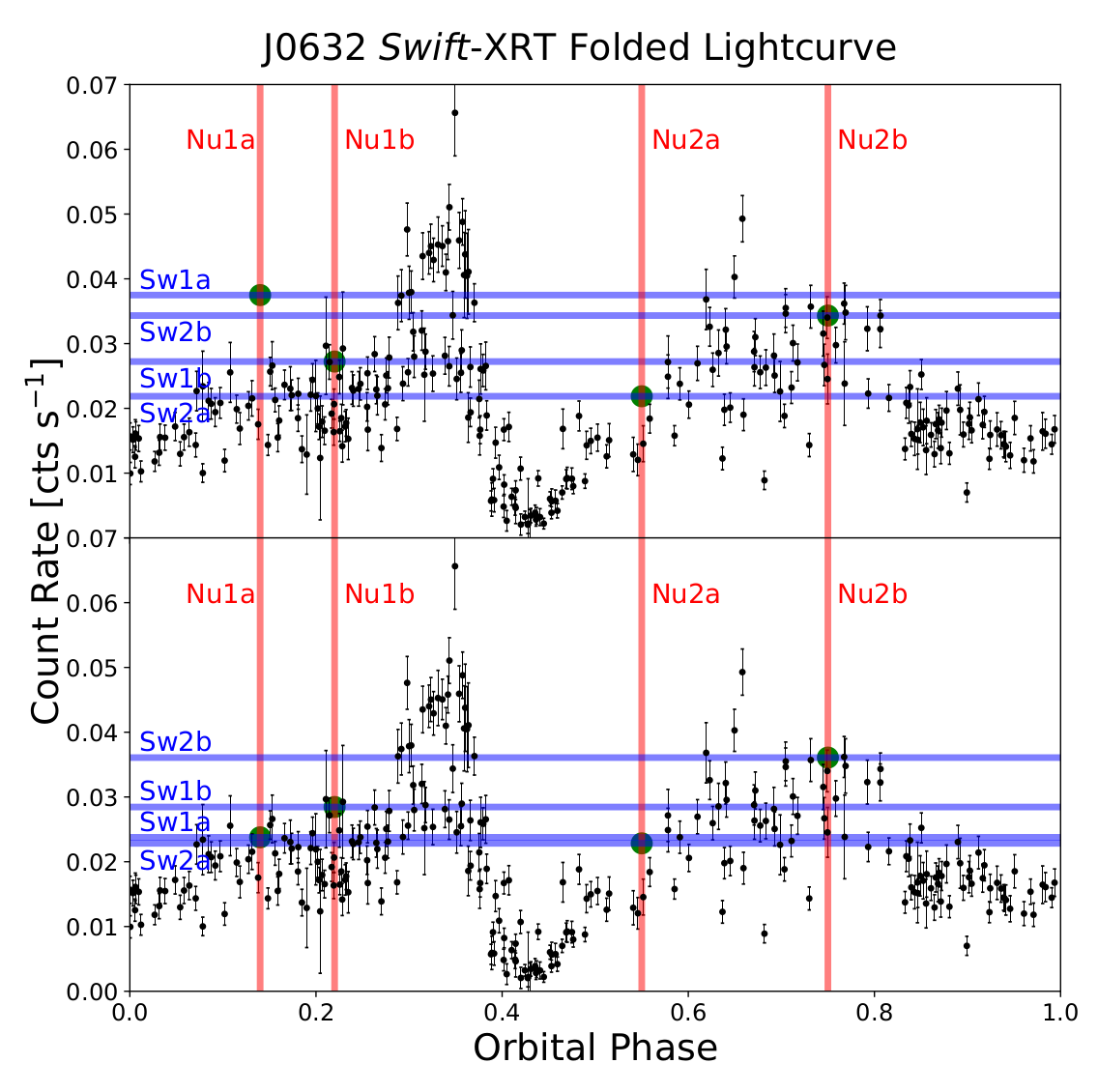 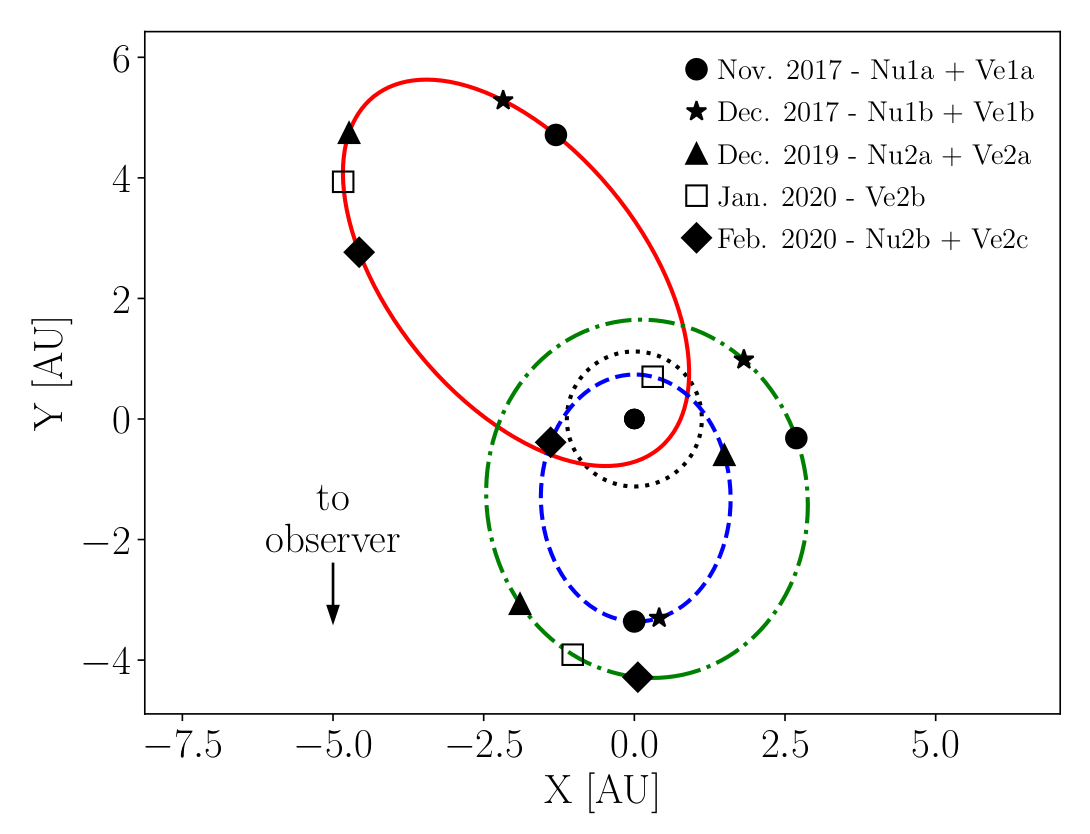 Figure 8: Illustration of the orbit of the compact object projected onto the orbital plane for the solutions from Casares et al. (2012a) (solid red line) and Moritani et al. (2018) (dashed blue line) and from Sec. 4 (dash-dotted green line). See Archer et al. (2020) for the complete list of system parameters for the former two. The locations of the compact object during the combined NuSTAR and VERITAS observations of the 2017 and 2019/20 campaign are indicated as black markers. The companion star is assumed to be in a fixed position and the estimated size of the circumstellar disk (Moritani et al. 2015; Zamanov et al. 2016) is indicated by a dotted black line. 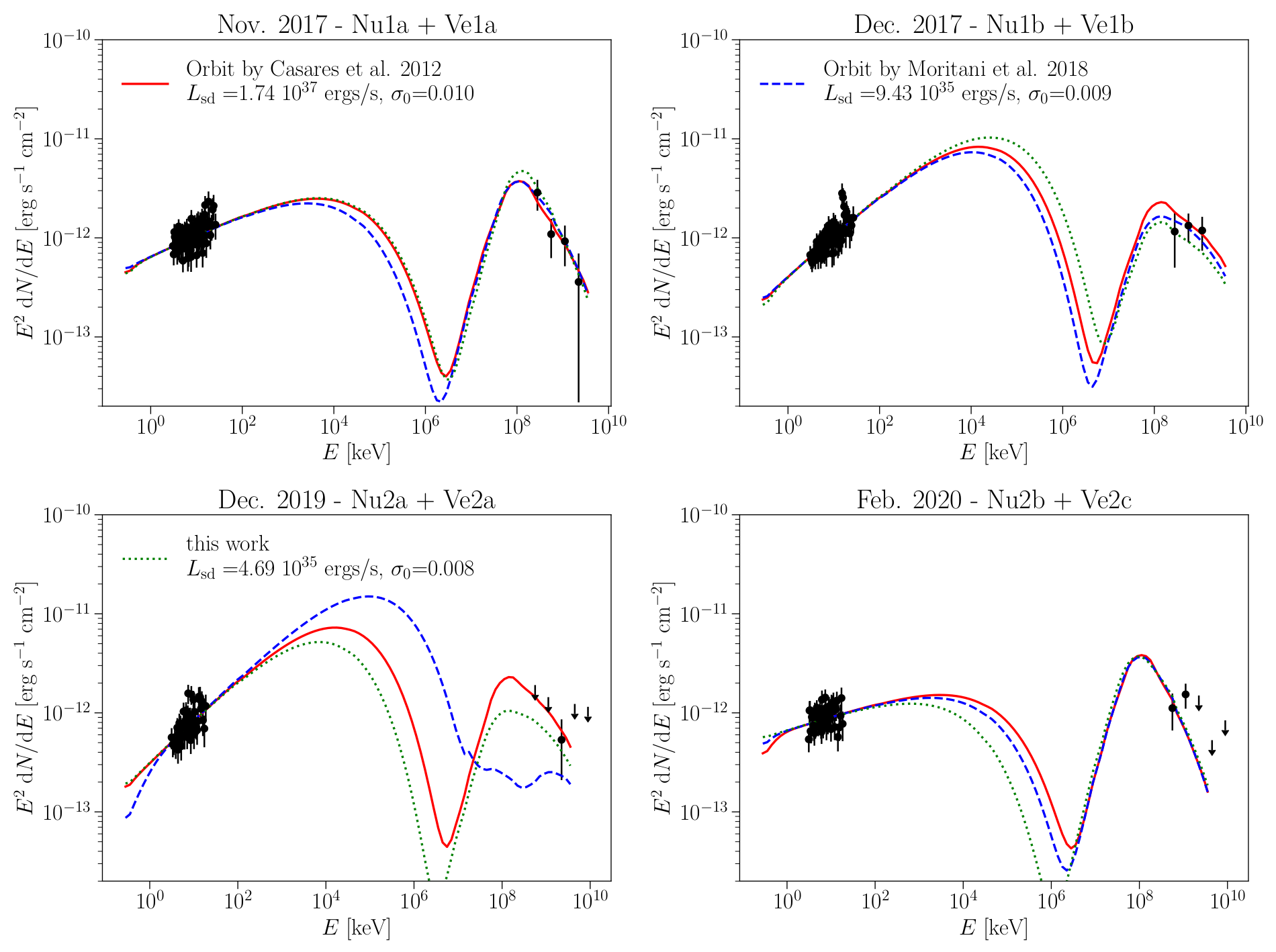