VERITAS observations of the most distant very-high-energy-detected blazar PKS 1424+240 provide perplexing results. After correction for the minimum level of gamma-ray photon absorption expected to occur for a source at a redshift of at least z=0.6035, the emission from the blazar shows an uncharacteristic feature at the highest detected energies.  A spectral up-turn above energies ~500 GeV is significantly observed in 2009 and 2013, challenging standard assumptions about blazar gamma-ray emission mechanisms and the diffuse photon field produced by stars and galaxies since the beginning of the Universe. Between the observations' epochs, the source is seen to show a variable flux, showing a flux level of ~2% of the Crab in 2013, half the initial ~5% Crab flux displayed by the source in 2009.  Investigation of the variability of this source at the highest
energies provides an opportunity to investigate the possibility of non-intrinsic gamma-ray emission from the direction of blazars, where cosmic ray interactions with photon fields along the line of sight produce a flux of secondary gamma-ray emission. Although no significant variability was found above 315 GeV due to a lack of statistics, variability at these energies can not be ruled out, leaving cosmic ray secondary interactions a viable theory in the description of the gamma-ray spectra of distant blazars such as PKS 1424+240.

Figure 3: The VHE spectrum derived from the 2013 VERITAS dataset, with a significant detection between 100 and 750 GeV (black points). The solid red line represents the powerlaw fit to the observed data. These data are shown with an envelope representing a 40% systematic error on the source flux and index error of ±0.3. The data are also shown after correction for EBL-absorption by Gilmore et al. (2012), assuming z = 0.6035 (gray points), along with the power-law (long-dashed line) fit to the absorption-corrected data. In blue, spectral points above 250 GeV derived with constant binning are shown. None of the individual points above 400 GeV is statistically significant in this representation. 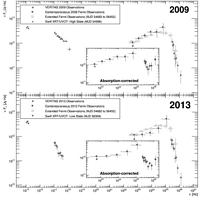 Figure 4: Two broadband SEDs of PKS 1424+240, corresponding to a relatively high (upper panel) and a low (lower panel) state. Within the inset, the VHE data are corrected for absorption using the Gilmore et al. (2012) EBL model for z = 0.6035. The contemporaneous LAT data above 100 MeV are shown along with the spectral results from full LAT observations. The Swift XRT and UVOT observations for relatively low and high states are also shown, after correction for absorption by the Milky Way column density.